Sailing Alone Around the Room: New and Selected Poems (Paperback) 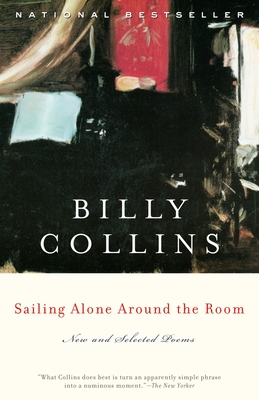 Sailing Alone Around the Room: New and Selected Poems (Paperback)


Currently Unavailable
Sailing Alone Around the Room, by America’s Poet Laureate, Billy Collins, contains both new poems and a generous gathering from his earlier collections The Apple That Astonished Paris, Questions About Angels, The Art of Drowning, and Picnic, Lightning. These poems show Collins at his best, performing the kinds of distinctive poetic maneuvers that have delighted and fascinated so many readers. They may begin in curiosity and end in grief; they may start with irony and end with lyric transformation; they may, and often do, begin with the everyday and end in the infinite. Possessed of a unique voice that is at once plain and melodic, Billy Collins has managed to enrich American poetry while greatly widening the circle of its audience.
Billy Collins is the author of twelve collections of poetry including The Rain in Portugal, Aimless Love, Horoscopes for the Dead, Ballistics, The Trouble with Poetry, Nine Horses, Sailing Alone Around the Room, Questions About Angels, The Art of Drowning, and Picnic, Lightning. He is also the editor of Poetry 180: A Turning Back to Poetry, 180 More: Extraordinary Poems for Every Day, and Bright Wings: An Illustrated Anthology of Poems About Birds. A former Distinguished Professor at Lehman College of the City University of New York, Collins served as Poet Laureate of the United States from 2001 to 2003 and as New York State Poet from 2004 to 2006. In 2016 he was inducted into the American Academy of Arts and Letters. He lives in Florida with his wife Suzannah.
“What Collins does best is turn an apparently simple phrase into a numinous moment.”
—The New Yorker

“It is difficult not to be charmed by Collins, and that in itself is a remarkable literary accomplishment.”
—The New York Review of Books

“[Collins] takes the mundane thing and shows you its mystery. And he takes the mysterious and strips it naked.”
—The Washington Post