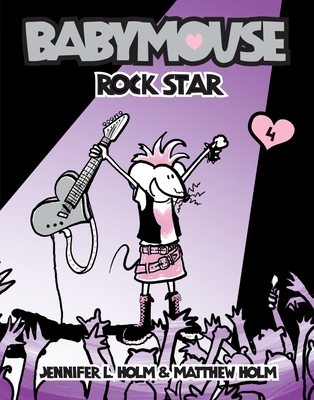 This is book number 4 in the Babymouse series.

Meet Babymouse--the spunky mouse beloved by young readers for more than a decade! Babymouse plans to be the star in the school concert but she needs to hit all the right notes. Can she and her flute shine in the spotlight? This groundbreaking young graphic novel series, full of humor and fun, is a bestseller that’s sold more than three million copies!

Move over Mozart! Babymouse has music in her soul...but sadly, not in her flute. Will Babymouse ever hit the right note? Will she be the star of the school concert, or is her musical career all washed up before it's even started? Find out in Rock Star, the sensational 4th book in the Babymouse graphic novel series!

DON'T MISS The BIG Adventures of Babymouse: Once Upon a Messy Whisker, the newest, brightest, and BIGGER THAN EVER graphic novel from BABYMOUSE!
Like Babymouse, brother and sister team Matthew Holm and Jennifer Holm were born with music in their souls. Jenni was consistently last chair in the flute section of her school band. Not to be outdone, Matt's garage band "House of Orange" won first place in his school's Battle of the Bands, despite being booed off the stage. Luckily, these underappreciated child prodigees found solace in their writing. Today, Jennifer is the New York Times bestselling author of several highly acclaimed novels, including three Newbery Honor-winners, Our Only May Amelia, Penny from Heaven, and Turtle in Paradise. Matthew is a graphic designer and freelance writer.
Here's what people are saying about Babymouse!