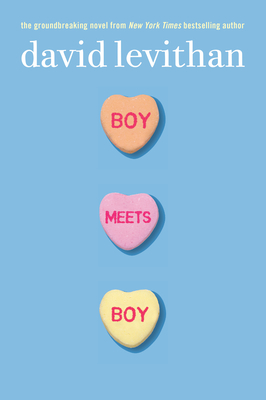 This is the story of Paul, a sophomore at a high school like no other: The cheerleaders ride Harleys, the homecoming queen used to be a guy named Daryl (she now prefers Infinite Darlene and is also the star quarterback), and the gay-straight alliance was formed to help the straight kids learn how to dance.

When Paul meets Noah, he thinks he’s found the one his heart is made for. Until he blows it. The school bookie says the odds are 12-to-1 against him getting Noah back, but Paul’s not giving up without playing his love really loud. His best friend Joni might be drifting away, his other best friend Tony might be dealing with ultra-religious parents, and his ex-boyfriend Kyle might not be going away anytime soon, but sometimes everything needs to fall apart before it can really fit together right.

This is a happy-meaningful romantic comedy about finding love, losing love, and doing what it takes to get love back in a crazy-wonderful world.

David Levithan is a children’s book editor in New York City.
"In its blithe acceptance and celebration of human differences, this is arguably the most important gay novel since Annie on My Mind and seems to represent a revolution in the publishing of gay-themed books for adolescents." —Booklist, starred review

"In a genre filled with darkness, torment, and anxiety, this is a shiningly affirmative and hopeful book." —The Bulletin, starred review

"Levithan's prophecy of a hate-free world in which everyone loves without persecution makes this a provocative and important read for all young adults, gay or straight." —School Library Journal, starred review

"Using a diverse cast of queer characters, David Levithan’s semi-utopian Boy Meets Boy...affirm[s] that there is a whole rainbow of ways to be gay." —The Horn Book