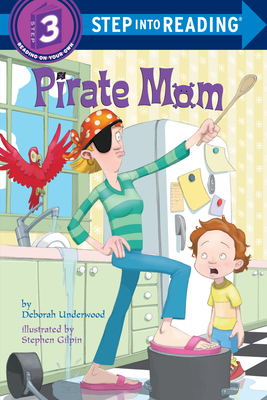 
Ships to Our Store in 1-5 Days
Join Pete, whose mom has been hypnotized to believe she's actually a pirate, on his adventure to get his mom to remember who she really is!

Yo ho ho! Pete loves pirates, but his mom thinks they are rude and messy. Then Pete and his mom go to see the Amazing Marco, and Marco hypnotizes Pete’s mom into thinking she’s a pirate! Now Pete’s mom won’t behave. She chases the neighbors. She steals underwear off other people’s clotheslines. She’s even flying the Jolly Roger over the house. Pete has to find the Amazing Marco. He wants his real mom back!
Deborah Underwood is the author of numerous fiction books for children, including A Balloon for Isabel, Pirate Mom, Part-Time Princess, and the New York Times bestsellers Here Comes the Easter Cat, The Quiet Book, and The Loud Book. She has written more than 25 nonfiction books for children, and her work has appeared in National Geographic Kids, Ladybug, Spider, and Highlights for Children. She lives in Northern California with her cat, Bella.

Stephen Gilpin has been working as an illustrator and cartoonist since 2000 and has nearly 20 picture books and chapter books under his belt. Gilpin is known for Sneezy the Snowman, Even Firefighters Go to the Potty, Pirate Mom, 100 Snowmen, and more.