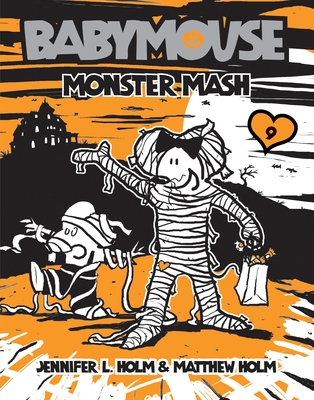 This is book number 9 in the Babymouse series.

Meet Babymouse--the spunky mouse beloved by young readers for more than a decade! Halloween is here and Babymouse wants to have the best costume party ever! What spooky surprises could be in store? This groundbreaking young graphic novel series, full of humor and fun, is a bestseller that’s sold more than three million copies!

It was a dark and scary Halloween. . . . This year, Babymouse is determined to have the best Halloween costume and the best Halloween party ever. Will Babymouse be the monster of her dreams? Will Felicia Furrypaws come to the party? And is that really the creature from the black lagoon living in Babymouse’s locker? Find out in Monster Mash—the 9th hilarious, action-packed installment of the beloved Babymouse graphic novel series!

DON'T MISS The BIG Adventures of Babymouse: Once Upon a Messy Whisker, the newest, brightest, and BIGGER THAN EVER graphic novel from BABYMOUSE!
Brother-sister team Matthew and Jennifer Holm have been everything from a ballerina (Jenni) to a semicolon (Matt) for Halloween, though they both have a particular fondness for Star Wars costumes. Today, Jennifer is the New York Times bestselling author of several highly acclaimed novels, including three Newbery Honor-winners, Our Only May Amelia, Penny from Heaven, and Turtle in Paradise. Matthew Holm is a graphic designer and freelance writer. Jennifer lives in Fallston, Maryland. Matthew lives in Portland, Oregon.
Here's what people are saying about Babymouse!