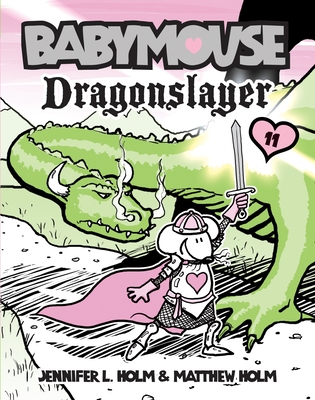 This is book number 11 in the Babymouse series.

Meet Babymouse--the spunky mouse beloved by young readers for more than a decade! Babymouse is on a quest to lead her friends to victory! But first, she’ll need to conquer her biggest challenge yet—MATH. This groundbreaking young graphic novel series, full of humor and fun, is a bestseller that’s sold more than three million copies!

Get ready for the next big epic fantasy . . . In a distant kingdom a growing darkness falls over the land. One is called to bring hope and slay the Mighty Dragon. Could it be . . . Babymouse? Our brave young hero will lead her fellow Mathletes in the quest of a lifetime, a death-defying fight to win back both her school’s honor and the coveted GOLDEN SLIDE RULE. Can she conquer the evil Owlgorithms and her own personal dragon—MATH? Find out in Dragonslayer!

DON'T MISS The BIG Adventures of Babymouse: Once Upon a Messy Whisker, the newest, brightest, and BIGGER THAN EVER graphic novel from BABYMOUSE!
Jennifer is the New York Times bestselling author of several highly acclaimed novels, including three Newbery Honor-winners, Our Only May Amelia, Penny from Heaven, and Turtle in Paradise. Matthew Holm is a graphic designer and freelance writer.
Here's what people are saying about Babymouse!