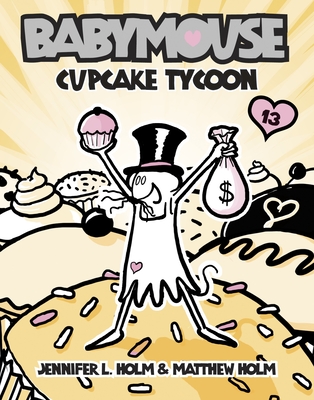 This is book number 13 in the Babymouse series.

Meet Babymouse--the spunky mouse beloved by young readers for more than a decade! There’s a fundraiser happening at school and Babymouse is determined to raise the most money…and beat her nemesis, Felicia Furrypaws! This groundbreaking young graphic novel series, full of humor and fun, is a bestseller that’s sold more than three million copies!

It's the icing on the (cup)cake! The school library is having a fund-raiser, and Babymouse is determined to raise the most money and WIN the GRAND PRIZE. Or . . . er, to help the school! The competition is fierce, but Babymouse will stop at nothing to get what she wants, even if it means outselling every last kid in school . . . including her nefarious nemesis, Felicia Furrypaws. The claws are out and the race is on in Cupcake Tycoon—the absolutely PRICELESS 13th installment of the Babymouse graphic novel series!

DON'T MISS The BIG Adventures of Babymouse: Once Upon a Messy Whisker, the newest, brightest, and BIGGER THAN EVER graphic novel from BABYMOUSE!
Brother-sister team Matthew Holm and Jennifer L. Holm began their empire young, selling painted rocks door-to-door. Jennifer eventually moved on to selling Girl Scout cookies, while Matt focused his entrepreneurial energies on the marching band's annual hoagie sale. Today they prefer eating food rather than selling it. Jennifer is the New York Times bestselling author of several highly acclaimed novels, including three Newbery Honor-winners, Our Only May Amelia, Penny from Heaven, and Turtle in Paradise. Matthew Holm is a graphic designer and freelance writer.
Here's what people are saying about Babymouse!