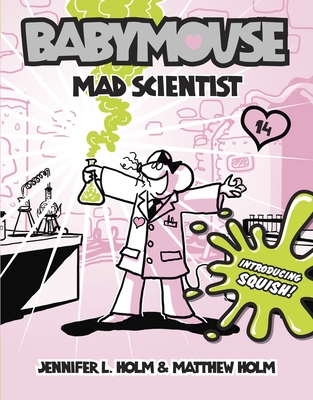 This is book number 14 in the Babymouse series.

Meet Babymouse--the spunky mouse beloved by young readers for more than a decade! Watch out, world! Babymouse is entering the science fair! Will her discovery win first place or is Babymouse in over her head? This groundbreaking young graphic novel series, full of humor and fun, is a bestseller that’s sold more than three million copies!

The greatest scientific discovery of the 21st century is about to be revealed . . . when Babymouse enters the school science fair! Will her amazing discovery win 1st place? Will it become a successful spin off series? Find out in Mad Scientist—the 14th installment of the award-winning graphic novel series, and the Babymouse that begins the amazing adventures of SQUISH: SUPER AMOEBA!

DON'T MISS The BIG Adventures of Babymouse: Once Upon a Messy Whisker, the newest, brightest, and BIGGER THAN EVER graphic novel from BABYMOUSE!
Brother-and-sister team MATTHEW HOLM and JENNIFER L. HOLM are not nuclear physicists and have never received a Nobel Prize, but they're still working on it. In addition to their top-secret scientific work, Jennifer is the New York Times bestselling author of several highly acclaimed novels, including three Newbery Honor-winners, Our Only May Amelia, Penny from Heaven, and Turtle in Paradise. Matthew Holm is a graphic designer and freelance writer. To find out more, visit Babymouse.com.
Here's what people are saying about Babymouse!