The Naked Ape: A Zoologist's Study of the Human Animal (Paperback) 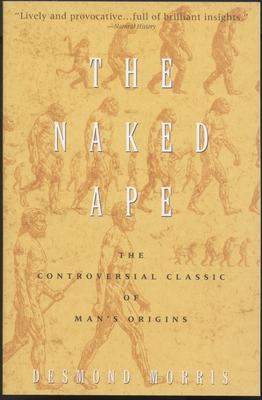 This work has become a benchmark of popular anthropology and psychology.

Zoologist Desmond Morris considers humans as being simply another animal species in this classic book first published in 1967. Here is the Naked Ape at his most primal in love, at work, at war. Meet man as he really is: relative to the apes, stripped of his veneer as we see him courting, making love, sleeping, socializing, grooming, playing. The Naked Ape takes its place alongside Darwin’s Origin of the Species, presenting man not as a fallen angel, but as a risen ape, remarkable in his resilience, energy and imagination, yet an animal nonetheless, in danger of forgetting his origins.

With its penetrating insights on mans beginnings, sex life, habits and our astonishing bonds to the animal kingdom, The Naked Ape is a landmark, at once provocative, compelling and timeless.

Desmond Morris was born in 1928. He became the curator of mammals at London Zoo in 1959, a post he held for eight years. In 1967 he published The Naked Ape which sold over ten million copies worldwide. An accomplished artist, television presenter, and filmmaker, Desmond Morris has been published in over 36 countries.