Prince Lestat and the Realms of Atlantis: The Vampire Chronicles (Hardcover) 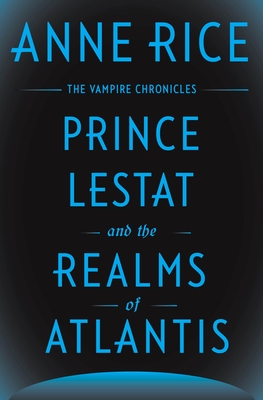 Prince Lestat and the Realms of Atlantis: The Vampire Chronicles (Hardcover)

This is book number 12 in the Vampire Chronicles series.

NATIONAL BESTSELLER • An ambitious and exhilarating novel of utopian vision and power, from Anne Rice, conjurer of the beloved best sellers Interview with the Vampire and Prince Lestat

"In my dreams, I saw a city fall into the sea. I heard the cries of thousands. I saw flames that outshone the lamps of heaven. And all the world was shaken . . ." --Anne Rice, Prince Lestat and the Realms of Atlantis

At the novel's center: the vampire Lestat de Lioncourt, hero, leader, inspirer, irresistible force, irrepressible spirit, battling (and ultimately reconciling with) a strange otherworldly form that has somehow taken possession of Lestat's undead body and soul. This ancient and mysterious power and unearthly spirit of vampire lore has all the force, history, and insidious reach of the unknowable Universe.

It is through this spirit, previously considered benign for thousands of vampire years and throughout the Vampire Chronicles, that we come to be told the hypnotic tale of a great sea power of ancient times; a mysterious heaven on earth situated on a boundless continent--and of how and why, and in what manner and with what far-reaching purpose, this force came to build and rule the great legendary empire of centuries ago that thrived in the Atlantic Ocean.

And as we learn of the mighty, far-reaching powers and perfections of this lost kingdom of Atalantaya, the lost realms of Atlantis, we come to understand its secrets, and how and why the vampire Lestat, indeed all the vampires, must reckon so many millennia later with the terrifying force of this ageless, all-powerful Atalantaya spirit.
ANNE RICE is the author of thirty-seven books. She died in 2021.
Excitement about Anne Rice’s
PRINCE LESTAT AND THE REALMS OF ATLANTIS

“Remarkable . . . Prepare to have your imagination shaken. Rice has constructed a wholly original view of Atlantis, and, like all of her luscious descriptions, it will leave you craving for more . . . Readers will be delighted . . . Rice’s ability to ease into her beautiful world with the same seamless transitions readers have come to know and love will assure you that Lestat has never fully left the building and neither has Rice’s immense talent.”
—Rebecca Munro, Bookreporter

“Prince Lestat and the Realms of Atlantis will undoubtedly win Rice new fans and welcome back old ones.”
—Toni V. Sweeney, New York Journal of Books

“Alluring . . . Rice invites us to look carefully at our society and consider what we are carrying along with us simply by virtue of the path on which we arrived . . . Powerful and thought-provoking . . . We recommend it unreservedly.”
—Andrea Sefler, Pop Mythology

“Rice exhibits tremendous skill in making the impossible seem not only possible but logical. She sets up a nail-biting dilemma involving the continued existence of vampires, and the second half of the book roars satisfyingly past.”
—Publishers Weekly

“A few pages in, I was sold . . . Lestat always felt real to me to a somewhat discomforting degree . . . Beautiful . . . Suave, complex . . . I will always be so grateful that Anne has given me another opportunity to follow the adventures of this very intriguing vampire, who is much more than just a one-dimensional caricature.”
—Carol Hoenig, Huffington Post