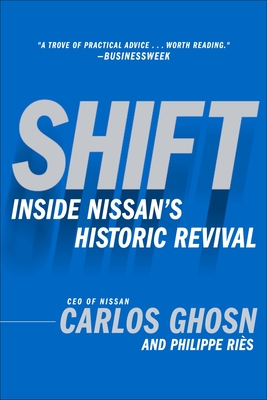 
Currently Unavailable
In Shift, Carlos Ghosn, the brilliant, audacious, and widely admired CEO of Nissan, recounts how he took the reins of the nearly bankrupt Japanese automotive company and achieved one of the most remarkable turnarounds in automotive—and corporate—history.

When Carlos Ghosn (pronounced like “phone”) was named COO of Nissan in 1999, the company was running out of gas and careening toward bankruptcy. Eighteen short months later, Nissan was back in the black, and within several more years it had become the most profitable large automobile company in the world. In SHIFT, Ghosn describes how he went about accomplishing the seemingly impossible, transforming Nissan once again into a powerful global automotive manufacturer.

The Brazilian-born, French-educated son of Lebanese parents, Ghosn first learned the management principles and practices that would shape his decisions at Nissan while rising through the ranks at Michelin and Renault. Upon his arrival at Nissan, Ghosn began his new position by embarking on a three-month intensive examination of every aspect of the business. By October 1999 he was ready to announce his strategy to turn the company around with the Nissan Revival Plan. In the plan, he consistently challenged the tradition-bound thinking and practices of Japanese business when they inhibited Nissan’s effectiveness. Ghosn closed plants, laid off workers, broke up long-standing supply networks, and sold off marginal assets to focus on the company’s core business. But slashing costs was just the first step in Nissan’s recovery. In fact, Ghosn introduced changes in every corner of the company, from manufacturing and engineering to marketing and sales. He updated Nissan’s car and truck lineup, took risks on dynamic new designs, and demanded improvements in quality—strategies that quickly burnished Nissan’s image in the marketplace, and re-established the company in the minds of consumers as a leader in innovation and engineering.

Like the best-selling memoirs of Jack Welch, Lou Gerstner, and Larry Bossidy, SHIFT is a fascinating behind-the-scenes look at what it takes to transform and re-create a world-class company. Written by one of the world’s most successful and acclaimed CEOs, SHIFT is an invaluable guide for business readers everywhere.
CARLOS GHOSN joined Nissan as COO in June 1999, became president a year later, and in 2001 assumed the position of president and CEO. Born in Brazil to Lebanese immigrants, he was educated in France, where he earned engineering degrees from Ècole Polytechnique and Ècole des Mines de Paris. He was chief operating officer of Michelin in Brazil before becoming COO of Renault and then taking over the reins of Nissan. In the spring of 2005, Ghosn will become the CEO of Nissan’s parent company, Renault, while continuing as CEO of Nissan.
“If you want to grasp how Nissan rediscovered itself, Shift is the ticket . . . The kind of company Ghosn likes to run is well presented here.” —The Boston Globe

“A trove of practical advice to executives who . . . find themselves in unfamiliar business cultures with different rules of engagement – and not much time to sort things out.”
—BusinessWeek