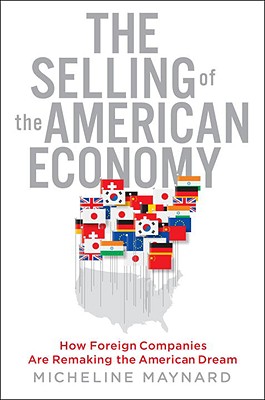 Today, many Americans regard globalization as a significant threat to our work force, and to our very way of life. As unemployment soars, the American automotive and manufacturing industries crumble, countless jobs continue to ship overseas, and the retail sector faces the worst slump in decades, cries of “Buy American” have grown louder and louder - in our communities, in the headlines, and in the halls of Washington. But at a time when an Italian company has bailed out one of our oldest and most iconic automakers; a French-German consortium is closing in on a multibillion dollar military contract to build our tanker planes and helicopters; companies based everywhere from Switzerland to India to Belgium are stocking our grocery aisles; and the assets of some of our most venerable financial institutions have been stripped down and bought up by banks from Hong Kong and London, what does “Buy American” mean any more?

That said, there is a great deal of discomfort about the influence that foreign companies are exerting on our economy. Are they making us more competitive in the global marketplace, or less? Are they creating jobs for Americans, or importing their own workforces? Are they a threat to our national security, or are they bringing us technology that actually makes us safer? When they open plants and factories on our shores, are they siphoning money from our economy, or bolstering it? In welcoming their investments, are we, as some critics contend, selling our economy to the highest bidder?

In THE SELLING OF THE AMERICAN ECONOMY, New York Times senior business correspondent Micheline Maynard argues that despite the lingering xenophobia that colors American perception of foreign-owned companies, foreign investments are actually an overwhelmingly positive force. Not only do they create thousands of jobs and pump billions of dollars into national and local economies, she says, they reinvigorate and strengthen communities, foster innovation and diversity in the marketplace, and teach Americans new ways to live and work.

At a time when our most cherished home-grown institutions, still reeling from the financial crisis, are downsizing, shuttering plants and factories, and filing for bankruptcy, the need for foreign investment has never been greater. In this compelling narrative, Maynard shows that if we are in fact selling our economy to the highest bidder, this may be very good news for America.

Through moving stories of workers whose lives have been transformed by the arrival of companies like Toyota, Airbus, and Tata, probing interviews with a host of government officials and local leaders who have fought to lure foreign companies to their communities and states, and revealing conversations with both American and foreign executives (including a rare and hard-won visit with Toyota’s elusive young new president) Maynard paints a fascinating portrait of the paradigm shift that is transforming the American economy - and remaking the American dream.

MICHELINE MAYNARD is the Senior Business Correspondent at the "New York Times," and the author of the acclaimed book, "The End of Detroit." The recipient of the 2009 Nathanial Nash award for excellence in business journalism, she has written for "USA Today" and "U.S. News""and World Report," and appears regularly on CNBC and NPR. She lives in Ann Arbor.

"At a time when the United States has never been more connected to the global marketplace, nor more dependent on capital from abroad, Micheline Maynard makes a deeply compelling case why foreign companies  investing in our country are so critical to America, including all of its communities and workers. This important book should be read by top officials of the Obama administration and by every senator, congressman, governor and mayor-- and by anyone else interested in our country's future."
- Jeffrey E. Garten, Juan Trippe professor of international trade and finance and former dean, Yale School of Management and Former Undersecretary of Commerce for International Trade, Clinton Administration


"This insightful book powerfully demonstrates the positive benefits that US citizens realize from foreign investment in our country: new jobs, improved communities and more competition. The proponents of protectionism and isolationism should be stopped in their tracks by the compelling narrative."
-Douglas Steenland, former CEO, Northwest Airlines

"While American companies globalize, foreign companies Americanize, transforming our landscape.  As Micheline Maynard makes compellingly clear in this vivid account, global firms have rescued companies, restored jobs, and revitalized communities in the U.S. — and have brought better ways of doing business that American companies may ignore only at their peril."
— Michael Useem, Professor of Management and Director of the Center for Leadership and Change, Wharton School, University of Pennsylvania.

"Offers a wealth of analysis explaining how foreign companies investing in the United States have long benefited America: through jobs, capital investment, and many other activities. Amidst the longest U.S. recession since the Great Depression, from which recovery will require creating good jobs at good wages, government and business leaders alike have much to learn from her insights."
--Matthew J. Slaughter, Signal Companies Professor of Management and Associate Dean, Tuck School of Business at Dartmouth

"A solidly reported, lucidly written book that completely debunks the conventional wisdom of American economic exceptionalism.  Clearly demonstrating that now, as always, this country is strengthened by foreign faith in our markets,  Micheline Maynard shows that "Buy American!" was and is excellent  and beneficial advice – for foreign companies. It turns out we're all fortunate they followed it.
- Peter Sagal, Host, NPR's Wait Wait Don't Tell Me.


"Micheline Maynard is the rare scholar who is a journalist, and journalist who is a scholar. The Selling of the American Economy is a compelling treatise on the positive impact of foreign direct investment on the American economy. Given the flight of American industry to low labor countries for manufacturing, engineering, software development and about anything, Maynard reminds us that it is too late to put up the fences and keep the foreigners out, and would be extremely unwise even if we could. Once again she gives us a look in the mirror that is ahead of its time.
- Jeffrey K. Liker, Professor, University of Michigan, and bestselling author of The Toyota Way