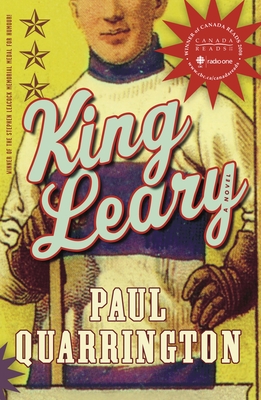 By Paul Quarrington
$17.95
Email or call for price

"A dazzling display of fictional footwork… The author has not written just another hockey novel; he has turned hockey in a metaphor for magic." Maclean's

Percival Leary was once the King of the Ice, one of hockey's greatest heroes. Now, in the South Grouse Nursing Home, where he shares a room with Edmund "Blue" Hermann, the antagonistic and alcoholic reporter who once chronicled his career, Leary looks back on his tumultuous life and times: his days at the boys' reformatory when he burned down a house; the four mad monks who first taught him to play hockey; and the time he executed the perfect "St. Louis Whirlygig" to score the winning goal in the 1919 Stanley Cup final.

Now all but forgotten, Leary is only a legend in his own mind until a high-powered advertising agency decides to feature him in a series of ginger ale commercials. With his male nurse, his son, and the irrepressible Blue, Leary sets off for Toronto on one last adventure as he revisits the scenes of his glorious life as King of the Ice.

The author of ten novels, Paul Quarrington was also a musician (most recently in the band Porkbelly Futures), an award-winning screenwriter and filmmaker, and an acclaimed non-fiction writer.

Paul Quarrington's novel, Galveston, was nominated for the Scotiabank Giller Prize; King Leary won the CBC's 2008 Canada Reads competition and the Stephen Leacock Memorial Medal; and Whale Music was awarded the Governor General's Literary Award for Fiction. Recently, Porkbelly Futures' self-titled second CD has been released to widespread acclaim, and Paul Quarrington's short film adaptation of The Ravine, entitled Pavane, was featured in the Moving Stories Short Film Festival. Paul Quarrington's non-fiction writing includes books on some of his favourite pastimes, such as fishing, hockey, and music. A regular contributor of book reviews, travel columns, and journalism to Canada's national newspapers and magazines, he also taught writing at Humber College and the University of Toronto.

Paul Quarringon passed away in January 2010.

“An extraordinary writer with a rare gift.” Timothy Findley