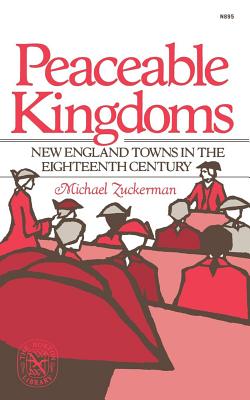 “This remarkable book seeks to lay out the human reality of community life in the original New England towns. Based on thorough research, shaped by an imagination that is both historical and anthropological, and lightly and lucidly written, Peaceable Kingdoms adds something new to American social history, and in its analysis of ‘consensual communalism’ throws new light on the general problem of community pressures to conformity.” —Bernard Bailyn, Harvard University

In this provocative analysis of the New England town before the Revolution, and of its enduring impact on the American character, Michael Zuckerman makes a major contribution toward a reinterpretation of the nature of American society and the origins of the non-liberal tradition in America. Arguing that the true concern of these towns was not the individual rights or liberties of the citizen, but rather the homogeneity and tranquility of the community, Mr. Zuckerman opens a new perspective on the phenomenon of American “town-meeting democracy.”