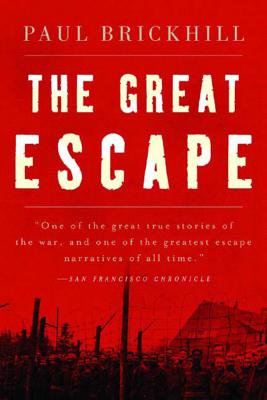 They were American and British air force officers in a German prison camp. With only their bare hands and the crudest of homemade tools, they sank shafts, forged passports, faked weapons, and tailored German uniforms and civilian clothes. They developed a fantastic security system to protect themselves from German surveillance.

It was a split-second operation as delicate and as deadly as a time bomb. It demanded the concentrated devotion and vigilance of more than six hundred men—every one of them, every minute, every hour, every day and night for more than a year.

Made into the classic 1963 war film of the same name starring Steve McQueen, James Garner, and Richard Attenborough.

Paul Brickhill (1916—1991) was shot down over the Mareth Line in Tunisia on March 17, 1943. He landed in the middle of a minefield in front of the enemy barbed wire and was captured. He was soon transferred to Stalag Luft III, where he joined organization "X" working on the great escape.
One of the great true stories of the war, and one of the greatest escape narratives of all time.
— San Francisco Chronicle

Absorbing... spine-tingling... puts the average war book so far in the shadow it's not even funny.
— Dallas Times Herald

For sheer suspense, puts the fictioneers to shame.
— Boston Globe