No Turning Back: Life, Loss, and Hope in Wartime Syria (Paperback) 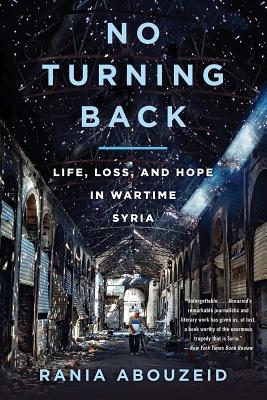 Finalist for the Lionel Gelber Prize

“Rania Abouzeid has produced a work of stunning reportage from the very heart of the conflict, daring to go to the most dangerous places in order to get the story.” —Dexter Filkins, Pulitzer Prize-winning author of The Forever War

Award-winning journalist Rania Abouzeid dissects the tangle of ideologies and allegiances that make up the Syrian conflict through the dramatic stories of four young people seeking safety and freedom in a shattered country. Hailed by critics, No Turning Back masterfully “[weaves] together the lives of protestors, victims, and remorseless killers at the center of this century’s most appalling human tragedy” (Robert F. Worth). Based on more than five years of fearless, clandestine reporting, No Turning Back brings readers deep inside Bashar al-Assad’s prisons, to covert meetings where foreign states and organizations manipulated the rebels, and to the highest levels of Islamic militancy and the formation of the Islamic State. An utterly engrossing human drama full of vivid, indelible characters, No Turning Back shows how hope can flourish even amid one of the twenty-first century’s greatest humanitarian disasters.

Rania Abouzeid has won the Michael Kelly Award and George Polk Award for foreign reporting, among many other prizes for international journalism. She has written for The New Yorker, Time, Foreign Affairs, Politico, the Guardian, and the Los Angeles Times. A former New America fellow, she lives in Beirut, Lebanon.

[An] unparalleled account of the Syrian uprising.
— The New Yorker

Extraordinary.… There is no better way to refocus on Syria than to read Rania Abouzeid’s book.
— Financial Times

Probably the most perceptive journalistic account of the war so far.
— New York Review of Books

Page after page of extraordinary reporting and many flashes of exquisitely descriptive prose.… [U]nforgettable.… Abouzeid’s remarkable journalistic and literary work has given us, at last, a book worthy of the enormous tragedy that is Syria.
— Christopher Dickey - New York Times Book Review

Eloquent and devastating.… Abouzeid relates the drama of this chaos in gripping prose.
— The Christian Science Monitor

Rania Abouzeid has produced a masterpiece.… No one else, to my knowledge, has reported this story so bravely or narrated it with such intimacy and power.
— Robert F. Worth, author of A Rage for Order: The Middle East in Turmoil, from Tahrir Square to ISIS

Rania Abouzeid has written an intimate portrait of a chaotic war. Her profiles of Syrians caught up in the savage unraveling of the country heightens the tragedy, a lens missing from the news stories. This book is a must-read for anyone who has watched the seemingly incomprehensible horror and for policymakers who must try to stop the violence.
— Deborah Amos, author of Eclipse of the Sunnis: Power, Exile, and Upheaval in the Middle East

No Turning Back works both on the level of deeply reported personal narratives of a tragedy that continues to unspool and also as a major work of history.

— Peter Bergen, author of United States of Jihad and Manhunt: The Ten-Year Search for Bin Laden from 9/11 to Abbottabad

In No Turning Back, Rania Abouzeid brings you up close and personal to the men and women who led the uprising in Syria. Abouzeid understands these people so well and her writing is so vivid that they practically jump off the page with all their dreams, ideals, and misplaced optimism. After No Turning Back, you won’t be able to hear anything more about Syria without feeling that you too know the people who are living (and dying) through it.

— Barbara Demick, author of Nothing to Envy and Logavina Street