A Covert Action: Reagan, the CIA, and the Cold War Struggle in Poland (Paperback) 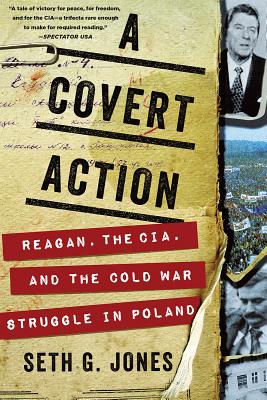 “A tale of victory for peace, for freedom, and for the CIA— a trifecta rare enough to make for required reading.” —Steve Donoghue, Spectator USA

In 1981, the Soviet-backed Polish government declared martial law to crush a budding democratic opposition movement. Moscow and Washington were on a collision course. It was the most significant crisis of Ronald Reagan’s fledgling presidency. Reagan authorized a covert CIA operation codenamed QRHELPFUL to support dissident groups, particularly the trade union Solidarity. The CIA provided money that helped Solidarity print newspapers, broadcast radio programs, and conduct an information campaign against the government.

This gripping narrative reveals the little-known history of one of America’s most successful covert operations through its most important characters—spymaster Bill Casey, CIA officer Richard Malzahn, Solidarity leader Lech Walesa, Pope John Paul II, and the Polish patriots who were instrumental to the success of the program. Based on in- depth interviews and recently declassified evidence, A Covert Action celebrates a decisive victory over tyranny for US intelligence behind the Iron Curtain, one that prefigured the Soviet collapse.

Seth G. Jones is the senior vice president, Harold Brown Chair, and director of the International Security Program at the Center for Strategic and International Studies (CSIS), as well as the author of Three Dangerous Men, A Covert Action, In the Graveyard of Empires, and Hunting in the Shadows. He lives outside of Washington, DC.