They Will Have to Die Now: Mosul and the Fall of the Caliphate (Paperback) 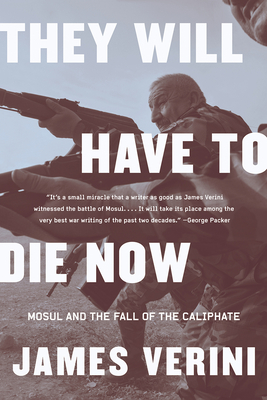 They Will Have to Die Now: Mosul and the Fall of the Caliphate (Paperback)

A Foreign Affairs Best Book of 2019

“It’s a small miracle that a writer as good as James Verini witnessed the battle of Mosul.… It will take its place among the very best war writing of the past two decades.” —George Packer

James Verini arrived in Iraq in the summer of 2016 to write about life in the Islamic State. He stayed to cover the jihadis’ last great stand, the Battle of Mosul, not knowing it would go on for nearly a year. This “urgent, scalding, hallucinatory work of war reportage” (Patrick Radden Keefe) takes the reader into the conflict against the most lethal insurgency of our time.

James Verini is a contributing writer at the New York Times Magazine and National Geographic. He has also written for The New Yorker, the Atavist, and other publications, and has won a National Magazine Award and a George Polk Award.
[James Verini] has written not only a deeply human account of the conflict but also a fascinating historical investigation of Mosul itself.
— Elliott Ackerman - New York Times Book Review

Verini’s firsthand account of the Battle of Mosul is a thing of terrible beauty.
— Jonathan Franzen

Superb.… Verini has provided us, at great physical risk, and with impressive intellectual rigor, a map of the complex factors that determined—and still determine—our success or failure against groups like ISIS in Iraq.
— Phil Klay - American Affairs Journal

A painful, moving, and necessary read.… [Verini] was able to capture the truth of war in Iraq (and of Iraq itself) in a way that precious few writers have. In fact, he helped me to make more sense, over a decade later, of my own deployment.
— David French - National Review

A vivid and bare-knuckles account of the fight against ISIS. They Will Have to Die Now will stand up with some of the best war reporting.

They Will Have to Die Now is an exceptional study both of modern war and of the most significant battle in the war against Islamic State. I read each page with relish and gratitude.

Most war reporters pay short visits to the front lines, grabbing images and stories that shock us and, at their best, sketch a few details of the larger story. Great ones, like Verini, immerse you in the danger and horror and thrill and black comedy of these places with novelistic detail.
— Mark Bowden - Airmail