The Apocalypse Factory: Plutonium and the Making of the Atomic Age (Paperback) 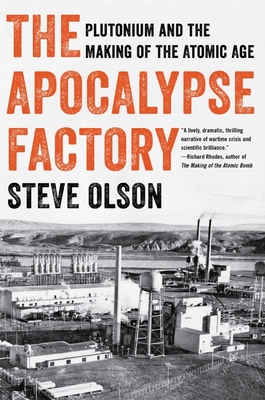 The Apocalypse Factory: Plutonium and the Making of the Atomic Age (Paperback)

A thrilling narrative of scientific triumph, decades of secrecy, and the unimaginable destruction wrought by the creation of the atomic bomb.

It began with plutonium, the first element ever manufactured in quantity by humans. Fearing that the Germans would be the first to weaponize the atom, the United States marshaled brilliant minds and seemingly inexhaustible bodies to find a way to create a nuclear chain reaction of inconceivable explosive power. In a matter of months, the Hanford nuclear facility was built to produce and weaponize the enigmatic and deadly new material that would fuel atomic bombs. In the desert of eastern Washington State, far from prying eyes, scientists Glenn Seaborg, Enrico Fermi, and many thousands of others—the physicists, engineers, laborers, and support staff at the facility—manufactured plutonium for the bomb dropped on Nagasaki, and for the bombs in the current American nuclear arsenal, enabling the construction of weapons with the potential to end human civilization.

With his characteristic blend of scientific clarity and storytelling, Steve Olson asks why Hanford has been largely overlooked in histories of the Manhattan Project and the Cold War. Olson, who grew up just twenty miles from Hanford’s B Reactor, recounts how a small Washington town played host to some of the most influential scientists and engineers in American history as they sought to create the substance at the core of the most destructive weapons ever created. The Apocalypse Factory offers a new generation this dramatic story of human achievement and, ultimately, of lethal hubris.

Steve Olson is the author of Eruption: The Untold Story of Mount St. Helens (winner of a Washington State Book Award), Mapping Human History (a finalist for the National Book Award), and other books. He has written for the Atlantic, Science, Smithsonian, and more. He lives in Seattle, Washington.
Olson is a crisp writer who brings clarity to complex subject matter...[he offers] hope based on his faith in human brilliance, tenacity and ingenuity to meet our challenges — the kind of traits and talents that made the Manhattan Project possible in the first place.
— Denise Kiernan - New York Times

Hanford, the vast complex that bred plutonium for the first atomic bombs on the banks of the mighty Columbia River in eastern Washington, has never had its full story told. Steve Olson now meets that challenge in a lively, dramatic, thrilling narrative of wartime crisis and scientific brilliance.
— Richard Rhodes, author of The Making of the Atomic Bomb

A captivating, unnerving history...A riveting history of a lesser-known Manhattan Project triumph that, like so many wartime triumphs, has lost its luster.
— Kirkus (starred review)

Olson writes lucidly, making even the most recondite details of the science involved clear to a nonscientist. And he’s eloquent in his chronicling of the lives affected — and sometimes destroyed — by the invention and use of the world’s most deadly weapon… [A] deft, informative, sometimes terrifying book.
— Michael Upchurch - Seattle Times

Science writer Olson (Eruption) delivers a lucid, fast-paced chronicle of the discovery and weaponization of plutonium and the unforeseen consequences of the nuclear arms race... This comprehensively researched and compulsively readable account deserves a large audience.

A gripping story of a time when the fate of the world lay on the line as the United States and Germany raced to translate scientific discoveries into decisive weapons of war. Anyone who has questioned whether investment in science matters must read this book. Anyone who hasn’t will want to.
— Marcia McNutt, president of the National Academy of Sciences

The Apocalypse Factory traces the pathway from the discovery of plutonium to the rise of immense production facilities in Washington State to fuel the US nuclear arsenal, with riveting details about the nearly aborted mission to bomb Nagasaki…Steve Olson leaves much to ponder, and he calls on our collective ingenuity to address the threat that nuclear weapons pose today.

A compulsively readable blend of science and storytelling…The Apocalypse Factory is a carefully researched tale of inventive genius, state-authorized mass murder, and the supertoxic legacy of a federal bomb-making mess that will never be cleaned up.

— Blaine Harden, author of Escape from Camp 14 and A River Lost: The Life and Death of the Columbia

A captivating, unnerving history...A riveting history of a lesser-known Manhattan Project triumph that, like so many wartime triumphs, has lost its luster.
— Kirkus (starred review)