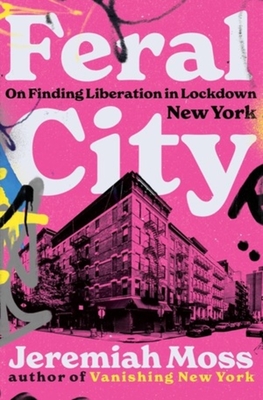 A Kirkus Best Nonfiction Book of 2022

A Bookforum Favorite Book of 2022

What happens when an entire social class abandons a metropolis? This genre-bending journey through lockdown New York offers an exhilarating, intimate look at a city returned to its rebellious spirit.

The pandemic lockdown of 2020 launched an unprecedented urban experiment. Traffic disappeared from the streets. Times Square fell silent. And half a million residents fled the most crowded city in America. In this innovative and thrilling book, author and social critic Jeremiah Moss, hailed as “New York City’s career elegist” (New York Times), explores a city emptied of the dominant class—and their controlling influence. “Plagues have a disinhibiting effect,” Moss writes. “As the normal order is suspended, the repressive force of civilization lifts and our rules fall away, shifting the boundaries of society and psyche.”

In public spaces made vibrant by New Yorkers left behind, Moss experienced an uncanny time warp. Biking through deserted Manhattan, he encountered the hustlers, eccentrics, and renegades who had been pressed into silence and invisibility by an oppressive, normative gentrification, now reemerging to reclaim the city. For one wild year the streets belonged to wandering nudists and wheelie bikers, mystical vagabonds and performance artists working to disrupt the status quo, passionate activists protesting for Black lives—along with the everyday New Yorkers who had been pushed to the margins for too long. Participating in a historic explosion of activism, resistance, and spontaneity, from queer BLM marches to exuberant outdoor dance parties, Moss discovered an intoxicating freedom. Without “hyper-normal” people to constrain it, New York became more creative, connected, humane, and joyful than it had been in years.

Moss braids this captivating narrative with an account of his renewed sense of place as a transgender man, weaving together insights from psychoanalysis, literature, and queer theory. A kaleidoscopic vision of a city transformed, Feral City offers valuable insight into the way public space and the spaces inside us are controlled and can be set free.

Jeremiah Moss is the acclaimed author of Vanishing New York. Winner of a Pushcart Prize, his writing has appeared in n+1, the New York Times, The New Yorker, and the Paris Review, among others. Moss is the pen name of Griffin Hansbury, who works as a psychoanalyst in Manhattan.
[Feral City] is ruminative, provocative, and moving.

[A] loving, vivid, near-perfect detailing of the alternate world of connection, possibility, and freedom that opened in the early months of the pandemic, amid overwhelming tragedy and suffering. Not since Rebecca Solnit’s A Paradise Built in Hell has a book so thoroughly explored the camaraderie that blooms from disaster.

Perhaps the best book on gentrification written in a decade… funny and gorgeously written… [Feral City] provides a vivid narrative of hypergentrification at a time when urban rents have produced cities where poor people have nowhere left to go but out.

Moss is an attentively loving witness to New York City… Feral City is worth our attention for its striking narrative of a city where radical community flourished in a protracted period of crisis.

Passionate and probing… In Feral City, Moss has created an indelible portrait of a city in transition; it vibrates with eat-the-rich energy and time-marches-on poignancy.

The writing is excellent and Moss is a grand storyteller. He tells an important story about New York and the pandemic and gentrification and who gets left behind during times of crisis.
— Roxane Gay

In its gentle way this is the most radical book I have read in a long time. It’s a tale of daily resistance. There could be another world, and Feral City in all its thoughtful scrappy investigative feeling is a utopian map for a future I would want to inhabit. It’s composed uncannily, yep, rhizomatically, out of Jeremiah Moss’s own hands-on evocation of home, the disordered place where we’re playing and marching.

A sublime and furious love letter to our city during the plague—to the months when we reclaimed our streets and lived most vividly even in the midst of death. A must for every New Yorker, and for everyone who has ever loved a place.
— Molly Crabapple, author of Drawing Blood and coauthor of Brothers of the Gun

Jeremiah Moss grapples with what happened when the private sector left the city at the height of the pandemic, and the people who share public space were left behind. Feral City asks the most complex questions: Who is the center of our culture? Who just owns the apparatus? What confrontations are necessary for our integrity as a collective? This story is a memory, a documentary, a personal journey, a political manifesto, a searing critique, a human embrace.

The saddest and the most exhilarating book you will read this year. It is an epic of a liberated city, a philosophical investigation, a love poem addressed to at least a million New Yorkers, and a hex flung at those zombies Moss calls the ‘hyper-normals.’
— Lucy Sante

A brilliant story of being lost and finding a place when socially constructed ideas of how people can or should show up are dismantled…. Highly recommended…for anyone who has felt inexorably gutted and remade during the COVID pandemic.
— Library Journal (starred review)

A captivating chronicle driven by keen wit, a strong sense of place, and a clear love of a city’s old soul.
— Kirkus Reviews (starred review)