The Premonition: A Pandemic Story (Hardcover) 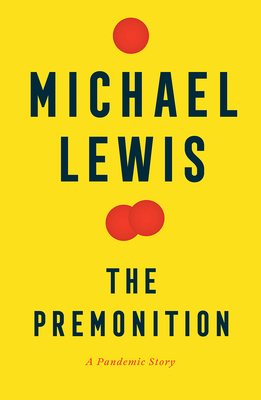 The Premonition: A Pandemic Story (Hardcover)

An American Scientist Science Book of 2021

A Next Big Idea Club Best Nonfiction of 2021

One of Smithsonian's 10 Best Science Books of 2021

For those who could read between the lines, the censored news out of China was terrifying. But the president insisted there was nothing to worry about.

Fortunately, we are still a nation of skeptics. Fortunately, there are those among us who study pandemics and are willing to look unflinchingly at worst-case scenarios. Michael Lewis’s taut and brilliant nonfiction thriller pits a band of medical visionaries against the wall of ignorance that was the official response of the Trump administration to the outbreak of COVID-19.

The characters you will meet in these pages are as fascinating as they are unexpected. A thirteen-year-old girl’s science project on transmission of an airborne pathogen develops into a very grown-up model of disease control. A local public-health officer uses her worm’s-eye view to see what the CDC misses, and reveals great truths about American society. A secret team of dissenting doctors, nicknamed the Wolverines, has everything necessary to fight the pandemic: brilliant backgrounds, world-class labs, prior experience with the pandemic scares of bird flu and swine flu…everything, that is, except official permission to implement their work.

Michael Lewis is not shy about calling these people heroes for their refusal to follow directives that they know to be based on misinformation and bad science. Even the internet, as crucial as it is to their exchange of ideas, poses a risk to them. They never know for sure who else might be listening in.

Michael Lewis is the best-selling author of Liar’s Poker, Moneyball, The Blind Side, The Big Short, The Undoing Project, and The Fifth Risk. He lives in Berkeley, California, with his wife and three children.
Lewis brings a welcome gimlet eye to the Trump era… the lessons of the “The Premonition” apply to more than just the C.D.C. — they tell us why government bureaucracies fail.
— Nick Confessore - New York Times Book Review

Lewis finds ways not just to showcase the brokenness of the system writ large but to zoom in on the sand in the gears.... [S]pellbinding.
— Jennifer Szalai - New York Times

Much has been written about how the pandemic came to be, but not so well known are the details about how it was able to spread so quickly in the United States…Michael Lewis has written a new book…that fills in those blanks. And it is a sweeping indictment of the Centers for Disease Control and Prevention.
— Rachel Martin - NPR

[T]he narrative of The Premonition makes for compelling reading...Lewis writes of the quest for an improved public health response to such devastating crises as an extended set piece in fearless and iconoclastic scientific inquiry, calling to mind the tense, high-stakes storyline of a Michael Crichton thriller or an episode of House.

In his new book...Michael Lewis does what Michael Lewis does better than anyone: He makes a problem of apparently ungodly complexity not only comprehensible but also a pleasure to be around. He does this by finding someone who sees the problem more clearly than others do (and invariably more clearly than the people in charge do), and then makes the problem as alive to the reader as the individual.
— Karl Vick - Time

This is a book about some brave, curious people who tried hard to swim against the tide. As always in a Lewis book they are brought vividly alive. The descriptions are punchy, the dialogue snappy. Lewis is a master of his form. He’s an expert, in fact.
— Christina Patterson - The Sunday Times (UK)

Replete with unforgettable characters, taut pacing and the stakes of life or death…. [A] page-turner.
— Elizabeth Greenwood - San Francisco Chronicle

An urgent, highly readable contribution to the literature of what might be called the politics of disease.
— Kirkus Reviews (starred review)