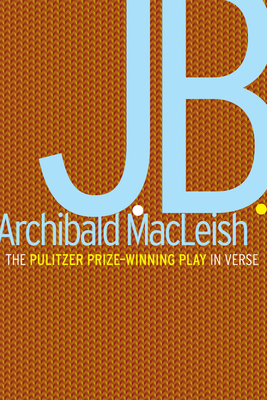 
Ships to Our Store in 1-5 Days
J. B.: A Play in Verse is Archibald MacLeish's Pulitzer Prize and Tony Award-winning play, based on the biblical story of Job.The story of a twentieth-century American banker and millionaire whom God commands be stripped of his family and wealth, but who refuses to turn his back on God. J.B.: A Play in Verse sparked a national conversation about the nature of God, the meaning of hope, and the role of the artist in society."It was an inspiration to select the Biblical figure of Job as a prism in which to reflect the suffering and the injustice of our time."—The Atlantic
ARCHIBALD MACLEISH (1892-1982) attended Yale University and served in World War I. Later, he went to Harvard Law School and practiced law in Boston for a few years until he gave it up and moved to Paris with his wife and children to devote all his time to writing poetry. He returned to the United States to research the Spanish conquest of Mexico, and the result, Conquistador (1932), won him a Pulitzer Prize. From 1920–1939, he was a member of the editorial board of Fortune magazine and he served as Librarian of Congress from 1929 to 1944. MacLeish's Collected Poems (1952) won a Pulitzer Prize and his poetic drama, J.B.: A Play in Verse, based on the Book of Job, was a Broadway success in 1957 winning a Pulitzer Prize and a Tony Award.