Magellan: And the First Voyage Around the World (Hardcover) 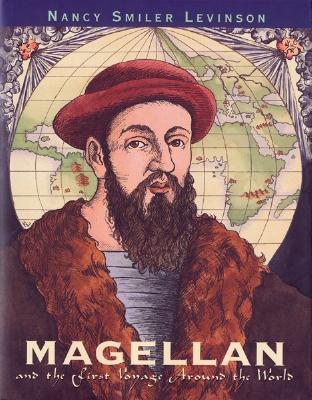 Magellan: And the First Voyage Around the World (Hardcover)

Determined to find a new and better route to Asia and the distant and profitable Spice Islands, Ferdinand Magellan set sail from Spain in 1519 on what would become the history-making first circumnavigation of the world. Magellan himself did not complete the journey—he was killed by a poison arrow while on the Pacific island of Mactan—but the expedition he mounted forever changed the course of human exploration. Details of the journey, including Magellan’s tools of navigation, the political battles for control over the valuable islands of the Pacific, and Magellan’s final moments in battle, are all vividly portrayed

Nancy Smiler Levinson is the author of many well-regarded books for children, including Christopher Columbus: Voyager to the Unknown (Lodestar) and If You Lived in the Alaska Territory (Scholastic). This is her first book for Clarion. She lives in Beverly Hills, California.

[T]his thoughtful study makes it clear just how Magellan earned his place as a central figure in the European Age of Exploration.
Kirkus Reviews

Levinson skillfully builds the setting against which Magellan's story takes place by analyzing diverse elements, including the influence of Prince Henry the Navigator, the explorations of da Gama and Columbus, and the intrigues of the European powers to gain wealth and power. The clarity with which these facts are presented is one of the book's strengths, and Magellan emerges from the shadows of history as a most remarkable man.
Horn Book