Homesick: My Own Story (Hardcover) 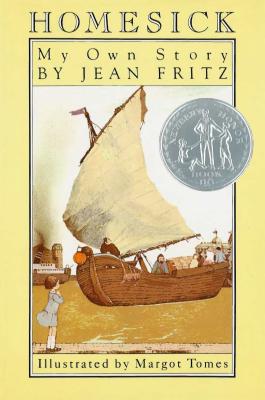 Homesick: My Own Story (Hardcover)


Currently Unavailable
"Fritz draws readers into scenes of her youth in the turbulent China of the mid-twenties. . . . the generous affection of her nurse/companion . . . her mother's grief over losing a second child, the dynamics of asuffering population venting its hostility on foreigners, and most of all, the loneliness of a child's exile from a homeland she has imagined constantly but never seen".--Booklist, starred review. Newbery Medal Honor Book; Boston Globe/Horn Book Award Honor Book.

Acclaimed biographer, Jean Fritz, was born in China where she lived until the age of thirteen. She tells her story in "Homesick, My Own Story," a Newbery Honor Book. Ms Fritz is the author of forty-five books for children and young people. Many center on historical American figures, gaining her a reputation as the premier author of biographies for children and young people. Among the prestigious awards Ms. Fritz has garnered are: a medal from the National Endowment for the Humanities, a May Hill Arbuthnot Lecture, a Laura Ingalls Wilder Award, an American Book Award, a Christopher Award, a Boston Globe-Horn Book Non-Fiction Award, a" New York Times" Notable Book of the Year, and many ALA Notable Books of the Year, "School Library Journal "Best Books of the Year, and ALA" Booklist" Editors' Choice Awards.