Who Was Ernest Hemingway? (Who Was?) (Paperback) 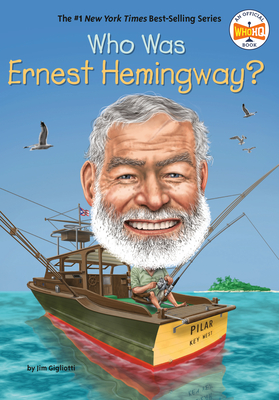 Who Was Ernest Hemingway? (Who Was?) (Paperback)


Available at One of Our Locations
Find out how a journalist and sportsman became one of the most famous American novelists of the twentieth century in this new addition to the #1 New York Times bestselling series!

Ernest Hemingway wasn't just a novelist. He was a hunter and a fisherman; he became an ambulance officer in Paris, France, during World War I; and he worked as a reporter during the civil war in Spain in the 1930s. All of these experiences had such an important impact on Ernest's life that he used them as inspiration for some of his most notable works of fiction, including The Sun Also Rises, A Farewell to Arms, and For Whom the Bell Tolls.

He wrote short stories, novels, and articles in an understated, direct style, that is still beloved by readers today. Hemingway is remembered as much for his fiction as he is for his adventurous lifestyle.
Jim Gigliotti is a writer based in Southern California. A former editor at the National Football League, he has written more than 50 books for readers of all ages, including biographies for young readers on Olympian Jesse Owens, baseball star Roberto Clemente, scientist Nikola Tesla, and musician Stevie Wonder.