Children of Paradise: The Struggle for the Soul of Iran (Paperback) 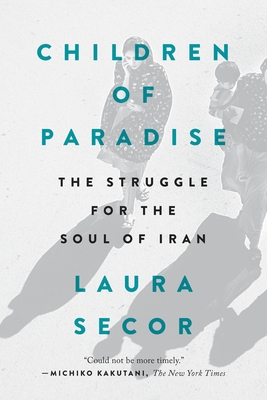 The drama that shaped today’s Iran, from the Revolution to the present day.

In 1979, seemingly overnight—moving at a clip some thirty years faster than the rest of the world—Iran became the first revolutionary theocracy in modern times. Since then, the country has been largely a black box to the West, a sinister presence looming over the horizon. But inside Iran, a breathtaking drama has unfolded since then, as religious thinkers, political operatives, poets, journalists, and activists have imagined and reimagined what Iran should be. They have drawn as deeply on the traditions of the West as of the East and have acted upon their beliefs with urgency and passion, frequently staking their lives for them.

With more than a decade of experience reporting on, researching, and writing about Iran, Laura Secor narrates this unprecedented history as a story of individuals caught up in the slipstream of their time, seizing and wielding ideas powerful enough to shift its course as they wrestle with their country’s apparatus of violent repression as well as its rich and often tragic history. Essential reading at this moment when the fates of our countries have never been more entwined, Children of Paradise will stand as a classic of political reporting; an indelible portrait of a nation and its people striving for change.

Laura Secor has written about Iran for The New Yorker, The New York Times Magazine, Foreign Affairs, The New Republic, and other publications, and has worked at The New York Times, The Boston Globe, The American Prospect, and Lingua Franca. She has been a fellow at the New York Public Library’s Cullman Center and the American Academy in Berlin, and has taught journalism at NYU and Princeton. Secor lives in Brooklyn.

Named a Must-Read by Flavorwire

“Could not be more timely. … Indelibly portrays the journalists, dissidents, reformers and student activists who have fought bravely for their ideals in a country where voicing one’s beliefs has often led to imprisonment, torture and death. … Secor’s portraits create an impressionistic montage of Iranian life during the last 37 years, which is hugely valuable in helping us understand Iran’s complex back story. … They provide sharp, pinhole windows into a country that for many years has seemed, in her words, like 'a black box whose contents were all but unknowable.' —Michiko Kakutani, The New York Times

“A deeply moving, intimate collection of personal stories...[Secor gives], through extensive interviews with Iranians in the country and in exile, a first-rate, highly readable intellectual history…Ms. Secor is at her very best when she relays the bravery and despair of dissidents, in particular the agony of women who have thrown themselves into the fight…Ms. Secor last visited Iran in 2012. We can hope that she isn’t denied a visa in the future for her truth-telling. If she is, Children of Paradise was worth the price.” —Wall Street Journal

“Democracy is always a work in progress. This point is made crystal clear in journalist Laura Secor’s exhaustively researched book … an insightful view of the evolving intellectual character of a nation that has been largely hidden from us for forty years. … A stellar example of investigative journalism and narrative nonfiction.” —San Francisco Chronicle

“Entrancing...In [Secor's] hands, clerics, scholars, and others who helped Iran morph into a republic where mosque and state are inseparable are like larger-than-life character from an epic novel...If beginning to know a people, a country, can help further our appreciation of them, [Children of Paradise is] an important building block.” —O, the Oprah Magazine

“Mesmerizing…Secor captures the extraordinary intellectual and political ferment of a country where millions of people chafe under authoritarian rule...substantive and deeply affecting."—Newsday

“A vibrant panorama of contemporary Iran that doubles as a thorough intellectual and political history of the country’s past four decades…highly accessible.” —Foreign Affairs

“Americans … might take this moment to enjoy Secor’s book to gain a better understanding of Iran’s rich recent history. In it, they will find this lesson: the circle may tighten around intellectual life in Iran, around political progress, and around the complicated heroes who hold down, often unsuccessfully, those barricades—but the ideas that animate these figures and their impulses, the debates behind them, will live on underground, behind closed doors, until it’s time to bloom again. Secor’s story … is a refreshingly Iranian tale—but for us there is this implicit warning: Do not trample this soil and foreclose that next Spring.” —The New Republic

"A thrilling introduction to Iranian culture and the daring intellectuals who have crafted ideological challenges to the rulers of the Islamic Republic." —Shelf Awareness

“Thoughtful political history [that] comprehensive[ly] engage[s] with the social and intellectual complexities that shaped the creation of this modern-day religious state… In visceral detail, Secor describes the political lurches and turns of the 1979 Islamic Revolution, and the country’s transformation from autocratic fiefdom to a theocratic “democracy.”… Children of Paradise works particularly well because it reaches beyond the documentation of Iran’s turbulent recent history, and succeeds in personifying it.” —Haaretz

"[Children of Paradise] covers a wide array of people, from political thinkers to reformers to revolutionaries, and provides fascinating glimpses and insights into a number of conflicts within Iran, as well as exploring the ideological debates behind them—ones which may have previously made little sense to many Western observers." —Signature Reads

“Secor’s book, which peers inside the 'black box' of a complex theocratic regime over the course of decades, will likely provide grist for arguments on more than one side.” —Flavorwire

“This immersive intellectual history… offers a firm grounding in the last 40 years of Iranian political thought and the many actions it has inspired in a complicated and fascinating country.” —Publishers Weekly

“An essential read [that] will help to shed light on the dreams, hardships, and changing views of the individuals who have helped to impact the direction of a nation…highly recommended.” —Library Journal

"Anyone who wants to understand the forces shaping post-revolutionary Iran will be rewarded by this intimate and intellectually thrilling portrait. It’s a towering accomplishment."
—Lawrence Wright, author of The Looming Tower and Thirteen Days in September

"Transcending the political clichés that are often offered as new insights on Iran, this wonderful and timely book provides a glimpse into what Secor calls the 'soul of the matter.' For once the focus is not on the rulers but on those who, with anguish and determination, tried to bring about political change—even as they themselves were transformed—and their desire, above all, to restore and preserve their country's sense of dignity, and their own."
—Azar Nafisi, author of Reading Lolita in Tehran and The Republic of Imagination

"Anyone who ever thought of Iran as a monolith must read Children of Paradise, which takes the reader far behind its fearsome caricature. The children referred to in the title are the brilliant dreamers behind the transformative ideology that produced today’s Iran. This is a meticulously reported intellectual history, but much more. Secor doesn’t flinch from depicting the cruelty of the revolutionary republic, but throughout, it is the passion and promise of the people that shines through."
—Barbara Demick, author of the National Book Award finalist Nothing to Envy: Ordinary Lives in North Korea