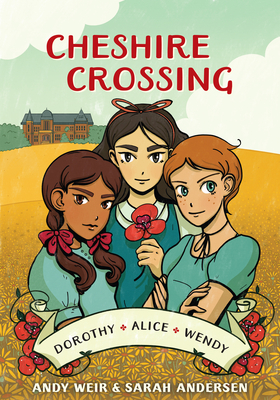 
Available at One of Our Locations
In a one-of-a-kind graphic novel collaboration between the #1 New York Times bestselling author of The Martian and the beloved illustrator behind Sarah’s Scribbles, Alice, Wendy, and Dorothy team up to save the multiverse, from Wonderland to Neverland and Oz.

Originating as fan fiction from the brilliant imagination of Andy Weir, now brought to vivid life by Sarah Andersen, Cheshire Crossing is a funny, breakneck, boundlessly inventive journey through classic worlds as you’ve never seen them before.

Years after their respective returns from Wonderland, Neverland, and Oz, the trio meet here, at Cheshire Crossing—a boarding school where girls like them learn how to cope with their supernatural experiences and harness their magical world-crossing powers.

But Alice, Wendy, and Dorothy—now teenagers, who’ve had their fill of meddling authority figures—aren’t content to sit still in a classroom. Soon they’re dashing from one universe to the next, leaving havoc in their wake—and, inadvertently, bringing the Wicked Witch and Hook together in a deadly supervillain love match.

To stop them, the girls will have to draw on all of their powers . . . and marshal a team of unlikely allies from across the magical multiverse.

“Deliciously funny . . . a shrewd and spirited adaptation that will leave audiences hoping for another installment . . . Andersen’s delightful cartoon drawing style meshes perfectly with Weir’s prose, allowing the work to broaden its appeal beyond middle graders to young adults and adults.”—Kirkus Reviews (starred review)
ANDY WEIR built a career as a software engineer until the success of his debut novel, The Martian, allowed him to live out his dream of writing full-time. He is a lifelong space nerd and devoted hobbyist of subjects such as relativistic physics, orbital mechanics, and the history of manned spaceflight.

SARAH ANDERSEN is a cartoonist, illustrator, and the author of numerous books based on her Sarah's Scribbles webcomic series published on Tapas.io. She graduated from the Maryland Institute College of Art in 2014. Both her illustration and cartooning work have been recognized by the Society of Illustrators.