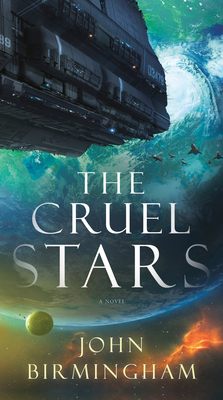 This is book number 1 in the The Cruel Stars Trilogy series.

In this epic sci-fi adventure for fans of The Expanse and Battlestar Galactica, five intrepid heroes must unite to save civilization after a long-dormant enemy awakens and strikes a devastating blow

“This jarring, engrossing story of a species-wide fight for survival is recommended for all science fiction readers.”—Publishers Weekly (starred review)

The galaxy was once terrorized by the Sturm, a group of “species purists” intent on destroying any human with genetic or cybernetic enhancements. Fashioning themselves as the one true “Human Republic,” the Sturm cut a bloody swath across the stars, killing billions before finally being defeated and driven into the far reaches of Dark Space. Centuries of peace bred complacency. Everyone believed the Sturm had died out in the Dark. They were wrong.

The enemy has returned and, with a brutal and decisive attack, knocks out almost all of humanity’s defenses. Now on the brink of annihilation, humankind’s only hope is a few brave souls who survived the initial attack: Commander Lucinda Hardy, thrust into uncertain command of the Royal Armadalen Navy’s only surviving warship. Booker3, a soldier of Earth, sentenced to die for treason, whose time on death row is cut short when the Sturm attack his prison compound. Princess Alessia, a young royal of the Montanblanc Corporation, forced to flee when her home planet is overrun and her entire family executed. Sephina L’trel, the leader of an outlaw band who must call on all of her criminal skills to resist the invasion. And, finally, Admiral Frazer McLennan, the infamous hero of the first war with the Sturm hundreds of years ago, who hopes to rout his old foes once and for all—or die trying.

These five flawed, reluctant heroes must band together to prevail against a relentless enemy and near-impossible odds. For if they fail, the future itself is doomed.

“Frenetic action viewed in a black fun-house mirror.”—Kirkus Reviews
John Birmingham is the author of Emergence, Resistance, Ascendance, After America, Without Warning, Final Impact, Designated Targets, Weapons of Choice, and other novels, as well as Leviathan—which won the National Award for Nonfiction at Australia’s Adelaide Festival of the Arts—and the novella Stalin’s Hammer: Rome. He has written for The Sydney Morning Herald, Rolling Stone, Penthouse, Playboy, and numerous other magazines. He lives on top of a hill with his wife, daughter, son, two cats, and two dogs.
“Gripping . . . Birmingham alternates between gut punches and laugh-out-loud humor. . . . Plenty of twists, sharp turns, and fateful encounters will keep readers guessing and turning pages. This jarring, engrossing story of a species-wide fight for survival is recommended for all science fiction readers.”—Publishers Weekly (starred review)

“[The Cruel Stars] has everything going for it: interesting characters, immersive world building, a believable backstory, high-stakes conflict, visceral action, and credible villains. . . . This is what military space opera should be.”—Booklist

“For readers who loved the frenetic pacing of the first few episodes of Battlestar Galactica or the gritty realism of A Song of Ice and Fire, The Cruel Stars needs to make its way to the top of summer reading lists.”—BookPage

“This is the best book John Birmingham has ever written! Think Firefly meets Game of Thrones and then some.”—A Couple of Pages