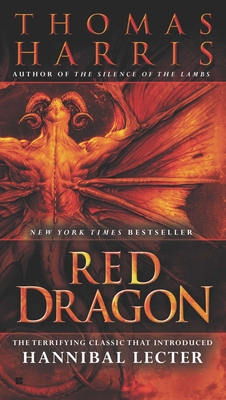 FBI agent Will Graham once risked his sanity to capture Hannibal Lecter, an ingenious killer like no other. Now, he’s following the bloodstained pattern of the Tooth Fairy, a madman who’s already wiped out two families.

To find him, Graham has to understand him. To understand him, Graham has only one place left to go: the mind of Dr. Lecter.
A native of Mississippi, Thomas Harris began his writing career covering crime in the United States and Mexico and was a reporter and editor for the Associated Press in New York City. He is the author of Black Sunday, Red Dragon, The Silence of the Lambs, Hannibal, Hannibal Rising, and Cari Mora. Five of his books have been made into films, including most notably the multiple Oscar winner, The Silence of The Lambs.
“The best popular novel to be published in America since The Godfather.”—Stephen King

“Want to faint with fright? Want to have your hair stand on end? Want to read an unforgettable thriller with equal parts of horror and suspense? Harris was obviously only warming up with his best seller Black Sunday.”—New York Daily News

“Irresistible...A shattering thriller...Readers should buckle themselves in for a long night’s read because from the first pages...Harris grabs hold.”—Publishers Weekly

“The scariest book of the season.”—The Washington Post Book World

“Easily the crime novel of the year.”—Newsday