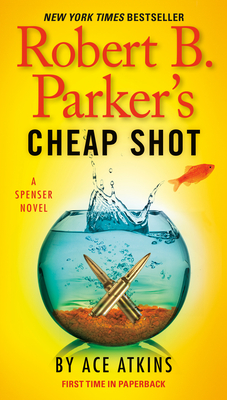 This is book number 43 in the Spenser series.

“Atkins gives Robert B. Parker’s long-running series one of its best installments to date” (Bookreporter.com) as Spenser investigates the kidnapping of a football player’s son.

Kinjo Heywood is one of the New England Patriots’ marquee players—a hard-nosed linebacker who’s earned his standing as one of the toughest guys in the league. He may be worth millions but his connection to a nightclub shooting two years before is still putting a dangerous spin on his life, and his career.

When Heywood’s nine-year-old son, Akira, is kidnapped, and a winding trail through Boston’s underworld begins, Spenser puts together his own all-star team of toughs. It will take both Hawk and Spenser’s protégé, Zebulon Sixkill, to watch Spenser’s back. Because Heywood’s next unpredictable move puts everyone in jeopardy as the clock winds down on Akira’s future.
Robert B. Parker was the author of seventy books, including the legendary Spenser detective series, the novels featuring police chief Jesse Stone, and the acclaimed Virgil Cole–Everett Hitch westerns, as well as the Sunny Randall novels. Winner of the Mystery Writers of America Grand Master Award and long considered the undisputed dean of American crime fiction, he died in January 2010.

Ace Atkins is the New York Times bestselling author of the Quinn Colson novels, the first two of which—The Ranger and The Lost Ones—were nominated for the Edgar Award for Best Novel (he also has a third Edgar nomination for his short story, “Last Fair Deal Gone Down”). In addition, he is the author of several New York Times bestselling novels in the continuation of Robert B. Parker’s Spenser series. Before turning to fiction, he was a correspondent for the St. Petersburg Times, a crime reporter for the Tampa Tribune, and, in college, played defensive end for the undefeated Auburn University football team (for which he was featured on the cover of Sports Illustrated). He lives in Oxford, Mississippi.
Praise for Robert B. Parker’s Cheap Shot

“Robert B. Parker’s Cheap Shot shows why [Ace Atkins] was a perfect choice to continue the Spenser novels.”—West Orlando News

“A stupendous addition to the series.”—MysteryPeople.com

“Atkins is bringing his own energy and strengths to Parker's series. Cheap Shot is Spenser, by the book.”—Tampa Bay Times

“Atkins’s gift...could lead to a long run, to the delight of Spenser devotees.”—Publishers Weekly