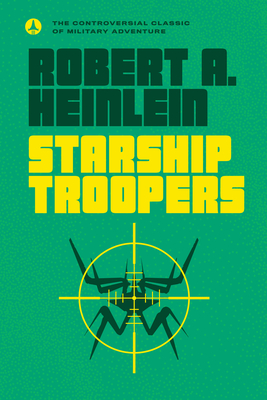 By Robert A. Heinlein
List Price: $18.00
Our Price: $17.00
(Save: $1.00 6%)
Available at One of Our Locations
In Robert A. Heinlein’s controversial Hugo Award-winning bestseller, a recruit of the future goes through the toughest boot camp in the Universe—and into battle against mankind’s most alarming enemy...

Johnnie Rico never really intended to join up—and definitely not the infantry. But now that he’s in the thick of it, trying to get through combat training harder than anything he could have imagined, he knows everyone in his unit is one bad move away from buying the farm in the interstellar war the Terran Federation is waging against the Arachnids.

Because everyone in the Mobile Infantry fights. And if the training doesn’t kill you, the Bugs are more than ready to finish the job...

“A classic…If you want a great military adventure, this one is for you.”—All SciFi
Robert Anson Heinlein was born in Missouri in 1907, and was raised there. He graduated from the U.S. Naval Academy in 1929, but was forced by illness to retire from the Navy in 1934. He settled in California and over the next five years held a variety of jobs while doing post-graduate work in mathematics and physics at the University of California. In 1939 he sold his first science fiction story to Astounding magazine and soon devoted himself to the genre.

He was a four-time winner of the Hugo Award for his novels Stranger in a Strange Land (1961), Starship Troopers (1959), Double Star (1956), and The Moon is a Harsh Mistress (1966). His Future History series, incorporating both short stories and novels, was first mapped out in 1941. The series charts the social, political, and technological changes shaping human society from the present through several centuries into the future.

Robert A. Heinlein’s books were among the first works of science fiction to reach bestseller status in both hardcover and paperback. He continued to work into his eighties, and his work never ceased to amaze, to entertain, and to generate controversy. By the time he died, in 1988, it was evident that he was one of the formative talents of science fiction: a writer whose unique vision, unflagging energy, and persistence, over the course of five decades, made a great impact on the American mind.
Praise for Starship Troopers

“Nothing has come along that can match it.”—Science Fiction Weekly

“A book that continues to resonate and influence to this day, and one whose popularity and luster hasn’t been dimmed despite decades of imitations.”—SF Reviews

“Heinlein’s genius is at its height in this timeless classic that is as meaningful today as when it was written...a fast-paced novel that never gets preachy. This is a definite must-have, must-read book.”—SF Site