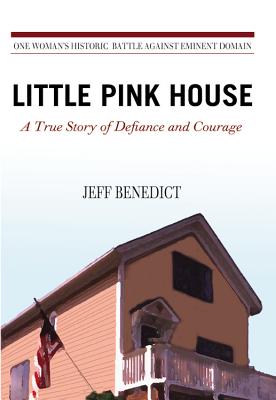 By Jeff Benedict
$32.00
On Our Shelves Now. (If this title isn't on hand at your preferred store, please call.)

SOON TO BE A MOTION PICTURE STARRING CATHERINE KEENER THAT "BRINGS URGENCY TO A FASCINATING, UNDER-EXPLORED THEME." - THE HOLLYWOOD REPORTER

Suzette Kelo was just trying to rebuild her life when she purchased a falling down Victorian house perched on the waterfront in New London, CT. The house wasn't particularly fancy, but with lots of hard work Suzette was able to turn it into a home that was important to her, a home that represented her new found independence.

Little did she know that the City of New London, desperate to revive its flailing economy, wanted to raze her house and the others like it that sat along the waterfront in order to win a lucrative Pfizer pharmaceutical contract that would bring new business into the city. Kelo and fourteen neighbors flat out refused to sell, so the city decided to exercise its power of eminent domain to condemn their homes, launching one of the most extraordinary legal cases of our time, a case that ultimately reached the United States Supreme Court.

In Little Pink House, award-winning investigative journalist Jeff Benedict takes us behind the scenes of this case -- indeed, Suzette Kelo speaks for the first time about all the details of this inspirational true story as one woman led the charge to take on corporate America to save her home.

"Catherine Keener nails the combination of anger, grace, and attitude that made Susette Kelo a nationally known crusader." -- Deadline Hollywood

Jeff Benedict is considered one of America's top investigative journalists. He has published several acclaimed books, including The Mormon Way of Doing Business, Out of Bounds, Pros and Cons and Without Reservation. His articles have been published in Sports Illustrated, the New York Times and the Los Angeles Times, and he has appeared on ESPN, NBC Nightly News, CBS's 60 Minutes, and ABC News.