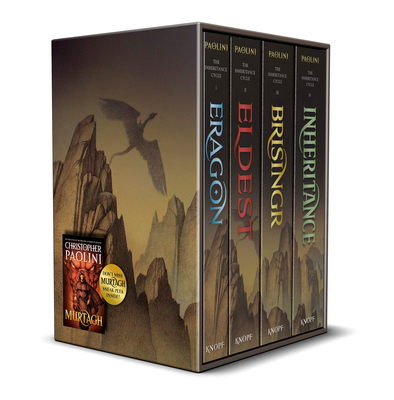 Experience the international fantasy sensation that is the Inheritance Cycle with this complete collection of the New York Times bestselling series!

"Christopher Paolini is a true rarity." --The Washington Post

One boy, one dragon, and a world of adventure come together in this four-book boxed set collection that makes a perfect gift for fantasy fans.

Eragon
Fifteen-year-old Eragon believes that he is merely a poor farm boy—until his destiny as a Dragon Rider is revealed. Eragon is soon swept into a dangerous tapestry of magic, glory, and power. Now his choices could save—or destroy—the Empire.

Eldest
Eragon must travel to Ellésmera, land of the elves, for further training in the skills of the Dragon Rider: magic and swordsmanship. But chaos and betrayal plague him at every turn, and nothing is what it seems. Before long, Eragon doesn’t know whom he can trust.

Brisingr
There is more adventure at hand for the Rider and his dragon, as Eragon finds himself bound by a tangle of promises he may not be able to keep.When unrest claims the rebels and danger strikes from every corner, Eragon must make choices that may lead to unimagined sacrifice.

Inheritance
Long months of training and battle have brought victories and hope, but they have also brought heartbreaking loss. Eragon and Saphira have come further than anyone dared to hope. But can they topple the evil king and restore justice to Alagaësia? And if so, at what cost?

The boxed set features interlocking art that reveals an image across the spines of all four books! And don’t miss the most recent book set in Eragon's world, The Fork, the Witch, and the Worm: Tales from Alagaësia!

Christopher Paolini's abiding love of fantasy inspired him to write the Inheritance Cycle, which quickly became an internationally bestselling series. He began the first draft of the introductory book in the series, Eragon, at age fifteen. Christopher draws inspiration for the world of Eragon and his dragon, Saphira, from the natural beauty that surrounds his home in Montana: the tumultuous weather, the roaring Yellowstone River, and the soaring Beartooth Mountains. Find out more about Christopher and the Inheritance Cycle at paolini.net.

Praise for The Inheritance Cycle:

"Paolini is a spellbinding fantasy writer." –The Boston Globe

"A breathtaking and unheard of success." –USA Today

“Will appeal to legions of readers who have been captivated by the Lord of the Rings trilogy.” –School Library Journal