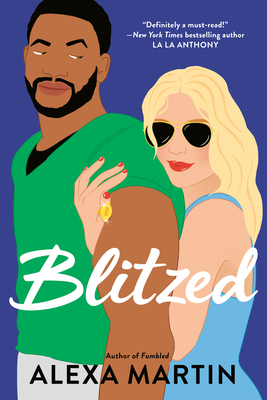 This is book number 3 in the Playbook, The series.

Maxwell Lewis has to make the play of his life in order to breach the woman of his dream’s defenses in this new football romance from the author of Fumbled.

Brynn Larson owes a lot to reality television and professional athletes. Her bar hit new heights of success after becoming a local haunt for the Denver Mustangs players and their WAGs. But although she’s grateful, that doesn’t mean she’s crazy. And that’s exactly what she would be to ever consider dating a professional athlete. Even if it’s Maxwell Lewis, whose shy smile makes her wonder what going on behind those beautiful brown eyes.

Maxwell knew from the moment he met Brynn that she was going to change his life. It was only a matter of time. But when he finally makes a move, fate conspires against him and everything goes wrong. Now he has to show her that their potential is real. Too bad for him, Brynn isn’t fooled by his glamorous NFL life, and when ghosts from both their pasts make a sudden reappearance, she must decide who she can trust. But when the person she’s most afraid of is herself, navigating life’s tackles is harder than anticipated.

Alexa Martin is a writer and stay at home mom. A Nashville transplant, she’s intent on instilling a deep love and respect for the great Dolly Parton in her four children and husband. The Playbook Series was inspired by the eight years she spent as a NFL wife and her deep love of all things pop culture, sparkles, leggings, and wine. When she’s not repeating herself to her kids, you can find her catching up on whatever Real Housewives franchise is currently airing or filling up her Etsy cart with items she doesn’t need.
“Alexa has done it again! Fans who enjoyed her previous work will appreciate Blitzed as a fresh perspective on romance in the sports world. Martin is an incredible storyteller and has a unique ability to blend fiction with real-life situations in the sports world. It’s an honest portrayal of the lives and romantic relationships of professional athletes. Definitely a must-read!”—La La Anthony, New York Times bestselling author

“Blitzed — the third in the series — is an electrifying cocktail of girl power, adorable romance, and enough drama to rival a reality show.”—NPR

"Alexa Martin’s smart, bubbly books are found at the intersection of sports and rom-coms."—Refinery29

"Martin captures the reality of the sexy, exciting and volatile culture of professional sports."—BookPage

"The lighthearted third sports romance in Martin’s Playbook series (after Fumbled) focuses as much on strong female friendship as it does on love. Readers will be delighted by this sweet romance."—Publishers Weekly