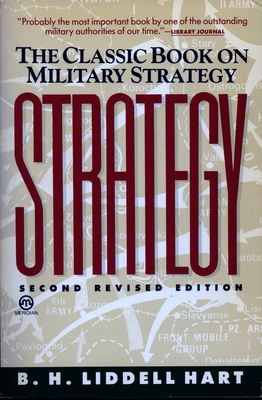 By Hart B. H. Liddell


Ships to Our Store in 1-5 Days
"The most important book by one of the outstanding military authorities of our time."—Library Journal

Strategy is a seminal work of military history and theory, and a perfect companion to Sun-tzu’s The Art of War and Carl von Clauswitz’s On War.

This is the classic book on war as we know it. During his long life, Basil H. Liddell Hart was considered one of the world's foremost military thinkers. In his writing, he stressed movement, flexibility, and surprise. He saw that in most military campaigns, it was vital to take an indirect approach. Rather than attacking the enemy head-on, one must dislocate their psychological and physical balance. With key examples from World War I and World War II (think trench warfare vs Blitzkreig), Liddell Hart defines the practical principles of waging war—“Adjust your end to your means,” “Take a line of operation which offers alternate objectives”—and proves they are as fundamental in the worlds of politics and business as they are in warfare.
Sir Basil Henry Liddell Hart, commonly known as Captain B. H. Liddell Hart, was an English soldier, military historian, military theorist, and author of many books, including Strategy, The German Generals Talk, The Memoirs of Captain Liddell Hart, and History of the Second World War.
"The most important book by one of the outstanding military authorities of our time."—Library Journal

“No man has devoted more concentrated thought to the nature and problems of strategy.”—The New York Times Book Review

“A major work… bristles with challenges to the mind.”—Saturday Review