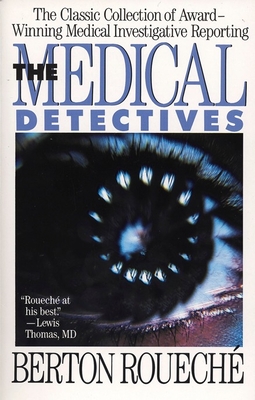 What do Lyme’s disease in Long Island, a pig from New Jersey, and am amateur pianist have in common? All are subjects in three of 24 utterly fascinating tales of strange illnesses, rare diseases, poisons, and parasites—each tale a thriller of medical suspense by the incomparable Berton Roueché. The best of his New Yorker articles are collected here to astound readers with intriguing tales of epidemics in America’s small towns, threats of contagion in our biggest cities, even bubonic plague in a peaceful urban park.

In each true story, local health authorities and epidemiologists race against time to find the clue to an unknown and possibly fatal disease. Sometimes a life hangs in the balance, and the culprit may be as innocuous as a bowl of oatmeal. Award-winning journalist Berton Roueché is unfailingly exact, informative, and able to keep anyone reading till dawn.
BERTON ROUECHÉ joined the staff of The New Yorker in 1944. His “Annals of Medicine” department and his stature as a medical journalist have been recognized by numerous awards, including those from the Lasker Foundation and the American Medical Association. He lived and worked in Amagansett, Long Island, for many years, and died, at age 83, in 1994.
“Berton Roueché’s ‘Annals of Medicine’ pieces enriched us for well over a quarter of a century. They have become classics in a genre he himself created single-handedly.”—The American Academy and Institute of Arts & Letters

“Roueché’s writings have become unofficial textbooks for medical students, interns, practitioners, scientists, and for that matter anyone interested in human illness. They are engrossing, instructive, accurate, and marvelous fun to read, and the present collection represents Roueché at his best.”—Lewis Thomas, MD, author of The Lives of a Cell and The Medusa and the Snail