Driven: Inside BMW, the Most Admired Car Company in the World (Hardcover) 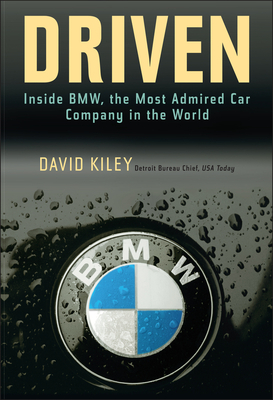 Driven: Inside BMW, the Most Admired Car Company in the World (Hardcover)


Ships to Our Store in 1-5 Days
(This book cannot be returned)
An exclusive look at one of the world's most successful and controversial companies, and the mysterious family behind it.

BMW is arguably the most admired carmaker in the world. It's financial performance is the envy of its competitors, and BMW products inspire near-fanatical loyalty. While many carmakers struggle with falling sales, profits and market share, demand for BMWs continues to grow, frequently outpacing production. Now, David Kiley-Detroit Bureau Chief at USA Today and author of Getting the Bugs Out, which covered Volkswagen's demise and rebirth, goes inside the fabled German automaker to see how it does what it does so well. With unprecedented access to BMW executives, Kiley goes behind the walls of BMW's famed Four Cylinders headquarters in Munich at a time when the company is in its most aggressive, and some say riskiest, expansion in its history and when some of the company's new products, like the 7 Series sedan and Z4 roadster, are for the first time drawing as many barbs from critics as bouquets. Kiley covers intimate details of the boardroom drama surrounding the company's nearly disastrous acquisition and subsequent sale of the British Rover Group and its expansion into selling MINI and Rolls Royce cars. Besides being a world-class carmaker, BMW is also considered one of the smartest consumer marketing companies and Kiley explores the extraordinary value and management of the BMW brand mystique. He also takes a revealing look at the mysterious and ultra-private Quandt family of Bad Homburg Germany, which owns a controlling stake in BMW: Johanna and Susanne Quandt, two of the wealthiest women in Europe and Stefan Quandt, one of the wealthiest bachelors on the continent.

David Kiley (Ann Arbor, MI) is the Detroit Bureau Chief at USA Today who has covered the auto industry for 17 years. He has been featured on Nightline, CNBC, CNN, MSNBC, NPR and the Today show. He is also the author of Getting the Bugs Out: The Rise, Fall, and Comeback of Volkswagen in America (0-471-26304-4), also available from Wiley.

DAVID KILEY is the Detroit Bureau Chief at USA Today and a journalist with fifteen years of experience covering the auto industry. As an automotive and advertising analyst, he has been featured on Nightline, CNBC, CNN, National Public Radio, and the Today show. He is also the author of Getting the Bugs Out: The Rise, Fall, and Comeback of Volkswagen in America, also available from Wiley.