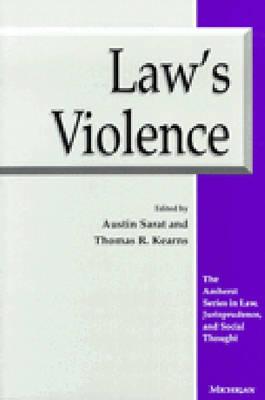 
Call or email for availability
"In bringing together accomplished and thoughtful scholars of different disciplines, with a command of literature ranging from the legal to the literary, and in relating the works to the central arguments of the late Professor Robert Cover, Sarat and Kearns have created a first-rate up-to-date exposition of this important and complicated issue, namely, how to understand better the violence implicit and explicit in law."--Legal Studies Forum
The relationship between law and violence is made familiar to us in vivid pictures of police beating suspects, the large and growing prison population, and the tenacious attachment to capital punishment in the United States. Yet the link between law and violence and the ways that law manages to impose pain and death while remaining aloof and unstained are an unexplored mystery. Each essay in this volume considers the question of how violence done by and in the name of the law differs from illegal or extralegal violence--or, indeed, if they differ at all.
Each author draws on a distinctive disciplinary tradition-- literature, history, anthropology, philosophy, political science, or law. Yet each reminds us that law, constituted in response to the metaphorical violence of the state of nature, is itself a doer of literal violence.
Austin Sarat is William Nelson Cromwell Professor of Jurisprudence and Political Science and Chair of the Program in Law, Jurisprudence, and Social Thought, Amherst College. Thomas R. Kearns is William H. Hastie Professor of Philosophy, Amherst College.