Einstein on Cosmic Religion and Other Opinions and Aphorisms (Paperback) 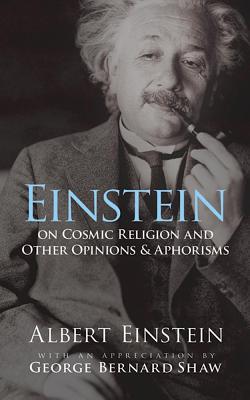 Einstein on Cosmic Religion and Other Opinions and Aphorisms (Paperback)


Ships to Our Store in 1-5 Days
(This book cannot be returned)
Science and religion are compatible, declares the famous physicist. In these essays, Einstein views science as the basis for a cosmic religion, embraced by scientists, theologians, and all who share a sense of wonder in the rationality and beauty of the universe.
In the course of his career, Einstein wrote more than 300 scientific and 150 nonscientific publications. These essays date from the 1930s and 40s. In direct, everyday language the author develops a coherent view that transcends both the antiquated religion of fear and the modern religion of ethics. His concept of cosmic religion combines science and religion, with science forming the basis for a more enlightened religion. In these essays and aphorisms, Einstein also reflects on pacifism, disarmament, and Zionism. In addition to a brief biography of the author, this volume includes a warm appreciation by George Bernard Shaw.
In addition to conducting the research that culminated in his acclaimed theories of relativity, Albert Einstein (1879-1955) taught and lectured at universities around the world. Einstein received numerous awards and honorary doctorate degrees in science, medicine, and philosophy, and he remains a towering symbol of intellectual and imaginative achievement. It's All Relative Around 1950, Hayward Cirker, Founder and President of Dover Publications, wrote to Einstein and asked his approval to proceed with a Dover paperback reprint of the 1923 collection of original papers on relativity by Einstein himself and others (H. A. Lorentz, H. Weyl, and H. Minkowski), which had originally been published in England. Einstein was reluctant, wondering how much interest there could possibly be in this relic of his work from 30 or more years earlier. Cirker persisted, and Einstein finally agreed -- the Dover edition of The Theory of Relativity has been in print ever since and has been followed by many other Dover books on relativity. The papers reprinted in this original collection will always be for the serious student the cornerstone of their Einstein library: Michelson's Interference Experiment (H. A. Lorentz); Electromagnetic Phenomena in a System Moving with any Velocity Less Than That of Light (H.A. Lorentz); On the Electrodynamics of Moving Bodies (A. Einstein); Does the Inertia of a Body Depend Upon its Energy Content? (A. Einstein); Space and Time (H. Minkowksi with notes by A. Sommerfeld); On the Influence of Gravitation on the Propagation of Light (A. Einstein); and The Foundation of the General Theory of Relativity (A. Einstein) found on pages 109-164 of this text; Hamilton's Principle and The General Theory of Relativity (A. Einstein); Cosmological Considerations on the General Theory of Relativity (A. Einstein); Do Gravitational Fields Play an Essential Part in the Structure of the Elementary Particles of Matter? (A. Einstein); and Gravitation and Electricity (H. Weyl). In the Author's Own Words: How can it be that mathematics, being after all a product of human thought independent of experience, is so admirably adapted to the objects of reality? What nature demands from us is not a quantum theory or a wave theory; rather, nature demands from us a synthesis of these two views which thus far has exceeded the mental powers of physicists. Do not be troubled by your difficulties with Mathematics, I can assure you mine are much greater. -- Albert Einstein Critical Acclaim for The Theory of Relativity: This book constitutes an indispensable part of a library on relativity. -- Nature