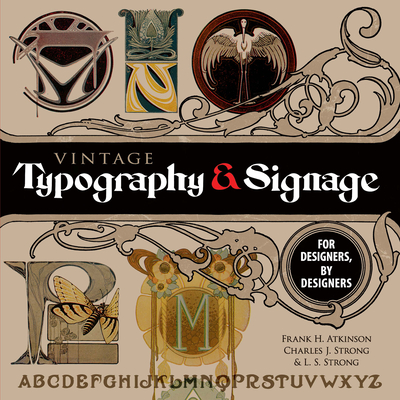 
Currently Unavailable
This versatile reference contains classic typographic images that will inspire the creation of ads with nostalgic flair. The collection consists of commercial signs, images, and fonts from two rare, early 20th-century sources that were used as a reference for sign painters and lithographers.
More than 1,400 eye-catching signs and design elements include 25 different fonts and more than 100 full-color images. The compilation abounds in borders, frames, typography, and other graphics, all ideal for recreating styles from the 1890s to the 1920s. Plates from the source books depict the color and black-and-white illustrations in their original usage. From elegant and delicate to big and bold, these images will inspire artists, crafters, and anyone seeking classic vintage accents.
Frank H. Atkinson was an early 20th-century American type designer. Charles J. Strong and L. S. Strong were instructors at the Detroit School of Lettering and leaders in the art of lettering and design.