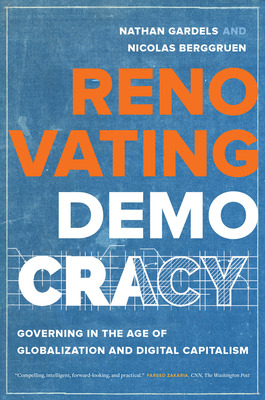 The rise of populism in the West and the rise of China in the East have stirred a rethinking of how democratic systems work—and how they fail. The impact of globalism and digital capitalism is forcing worldwide attention to the starker divide between the “haves” and the “have-nots,” challenging how we think about the social contract.

With fierce clarity and conviction, Renovating Democracy tears down our basic structures and challenges us to conceive of an alternative framework for governance. To truly renovate our global systems, the authors argue for empowering participation without populism by integrating social networks and direct democracy into the system with new mediating institutions that complement representative government. They outline steps to reconfigure the social contract to protect workers instead of jobs, shifting from a “redistribution” after wealth to “pre-distribution” with the aim to enhance the skills and assets of those less well-off. Lastly, they argue for harnessing globalization through “positive nationalism” at home while advocating for global cooperation—specifically with a partnership with China—to create a viable rules-based world order.

Thought provoking and persuasive, Renovating Democracy serves as a point of departure that deepens and expands the discourse for positive change in governance.

Nathan Gardels is Cofounder of the Berggruen Institute and Editor-in-Chief of The WorldPost, a partnership with the Washington Post. He is the coauthor of Intelligent Governance for the 21st Century: A Middle Way between East and West, a Financial Times best book of 2012. His previous books include American Idol after Iraq, The Changing Global Order and At Century’s End.

Nicolas Berggruen is Founder and Chairman of the Berggruen Institute. He is coauthor of Intelligent Governance for the 21st Century: A Middle Way between West and East and is copublisher of The WorldPost. He is also Chairman of Berggruen Holdings.

"In this new book, Nicolas Berggruen, the founder and chairman of the Berggruen Institute, and his co-founder, the WorldPost editor Nathan Gardels, are kicking the tires of democracy. The brainy duo take this opportunity to think about the system of government, what makes it work, how it fails, and whether it's still the best way to run the world. This isn't light reading, but it's necessary.”
— Town & Country

"The book is a romp through all that’s going wrong with politics, from populists on the rise, robots stealing jobs, climate change being ignored and technocrats bereft of fresh ideas."
— The Economist

"The book offers a useful analysis of some of the major challenges that come with globalization and the increasingly technological world in which we live and serves as a useful supplement to existing studies."
— European Legacy