How White Men Won the Culture Wars: A History of Veteran America (Hardcover) 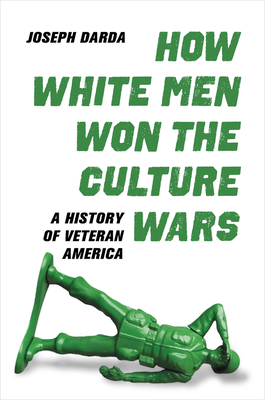 How White Men Won the Culture Wars: A History of Veteran America (Hardcover)


Ships to Our Store in 1-5 Days
CHOICE Outstanding Academic Title, 2022

A cultural history of how white men exploited the image of the Vietnam veteran to roll back civil rights and restake their claim on the nation.

“If war among the whites brought peace and liberty to the blacks,” Frederick Douglass asked in 1875, peering into the nation’s future, “what will peace among the whites bring?” The answer then and now, after civil war and civil rights: a white reunion disguised as a veterans’ reunion.

How White Men Won the Culture Wars shows how a broad contingent of white men––conservative and liberal, hawk and dove, vet and nonvet––transformed the Vietnam War into a staging ground for a post–civil rights white racial reconciliation. Conservatives could celebrate white vets as raceless embodiments of the nation. Liberals could treat them as minoritized heroes whose voices must be heard. Erasing Americans of color, Southeast Asians, and women from the war, white men with stories of vets on their mind could agree, after civil rights and feminism, that they had suffered and deserved more. From the POW/MIA and veterans’ mental health movements to Rambo and “Born in the U.S.A.,” they remade their racial identities for an age of color blindness and multiculturalism in the image of the Vietnam vet. No one wins in a culture war—except, Joseph Darda argues, white men dressed in army green.
Joseph Darda is Associate Professor of English at Texas Christian University and the author of Empire of Defense: Race and the Cultural Politics of Permanent War.

“Original and persuasive. . . . A wide-ranging and provocative tour through the post-Vietnam cultural and political scene.”
— The New Republic

"Simultaneously uplifting and disconcerting, How White Men Won the Culture Wars is recommended for all readers interested in US history, particularly those interested in looking at contemporary commonalities but more specifically the ways race has been used in culture wars. There simply is not another book quite like this, making Darda’s work groundbreaking."

"How White Men Won the Culture Wars identifies a meta-phenomenon evocative of the existential precipice faced by Germany after its loss of the First World War, which is among the unsettling takeaways from this unique contribution to studies of American political culture."