Eating Mud Crabs in Kandahar: Stories of Food during Wartime by the World's Leading Correspondents (California Studies in Food and Culture #31) (Paperback) 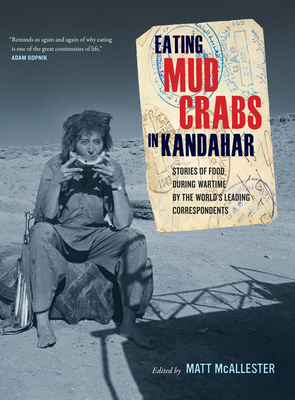 Eating Mud Crabs in Kandahar: Stories of Food during Wartime by the World's Leading Correspondents (California Studies in Food and Culture #31) (Paperback)


Available at One of Our Locations
These sometimes harrowing, frequently funny, and always riveting stories about food and eating under extreme conditions feature the diverse voices of journalists who have reported from dangerous conflict zones around the world. A profile of the former chef to Kim Jong Il of North Korea describes Kim's exacting standards for gourmet fare, which he gorges himself on while his country starves. A journalist becomes part of the inner circle of an IRA cell thanks to his drinking buddies. And a young, inexperienced female journalist shares mud crab in a foxhole with an equally young Hamid Karzai. Along with tales of deprivation and repression are stories of generosity and pleasure, sometimes overlapping. This memorable collection, introduced and edited by Matt McAllester, is seasoned by tragedy and violence, spiced with humor and good will, and fortified, in McAllester's words, with "a little more humanity than we can usually slip into our newspapers and magazine stories."
Matt McAllester is a Pulitzer Prize–winning journalist and a contributing editor at Details magazine. He is author of Bittersweet: Lessons from My Mother's Kitchen, Blinded by Sunlight: Surviving Abu Ghraib and Saddam’s Iraq, and Beyond the Mountains of the Damned: The War inside Kosovo. He is also Visiting Professor of Journalism at the City University of New York Graduate School of Journalism, where he teaches international reporting. His website is www.mcallester.com.
“If breaking bread is key to our humanity, it is doubly so in a conflict zone. In this riveting collection, correspondents share war stories through the lens of food and drink. . . . The food rituals become a vehicle for tales of greed and pettiness, but also friendship and human dignity.”
— Mother Jones

“If you're the type of person who is curious about lives lived under extreme circumstances and the journalists who cover them, you'll find stories to savor in Eating Mud Crabs in Kandahar."
— Los Angeles Times

“Though Ernest Hemingway was arguably the best food writer of his day, he was not alone in the trenches and deserts where he got his inspiration, and this splendid volume of reports by journalists who spent time smack in the middle of the action at Kandahar, Haiti, Pakistan, and other war zones will give you a greater appreciation of whatever it is you eat at your dinner table tonight. There's a lot of quirkiness to these stories—how could there not be when one is titled ‘How Harry Lost His Ear’?—and there are gristly tales of the horrors and deprivations of war. But it is in the ingenuity and the hunger pangs of people trying first to survive then not to starve that you find how important a meal, not just sustenance, is to the human spirit.”
— Esquire

“It may not be the usual light holiday read, but it's a fascinating one. This compilation of food-centric stories from foreign correspondents around the world will put you at the table with well-fed dignitaries and on mountainsides in Afghanistan with soldiers digging through their MREs (meals ready to eat).”
— San Francisco Chronicle

“Offers mindful stories about food and extreme eating from journalists in conflict zones around the world, including a profile of the former chef to deceased dictator Kim Jong-iI of North Korea and a young female journalist’s tale of sharing the mud crabs of the title, with a just-as-young Hamid Karzai (Afghan president) in a foxhole.”

“These are no Bourdain-like reminiscences of exploring foreign cuisine. The authors share the realities of MREs, the eating habits of famous and infamous political figures, and the struggle of surviving for weeks on burned rice and filthy water. . . . A compelling and highly worthwhile read.”
— Serious Eats

“An exceptional choice for those who enjoy finding out the hidden culinary lives of the people whom we read about in the daily press. . . . A pleasurable read such as this would be a great addition to a course on the subject of food and memory, or even as lightly intellectual fare for the food enthusiast. Highly recommended.”
— Indiana Review

“By sharing memories of meals eaten with refugees, with soldiers, with friends made in unlikely war-torn places--and in one case, with their captors--the 18 journalists whose stories appear here provide an unusual tour of the wars of our time. . . . The reporters' locales, experiences and voices bring a variety of courses to the table.”
— Shelf Awareness