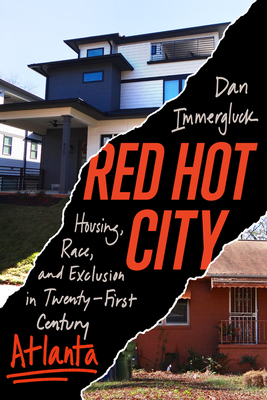 
Ships to Our Store in 1-5 Days
An incisive examination of how growth-at-all-costs planning and policy have exacerbated inequality and racial division in Atlanta.

Atlanta, the capital of the American South, is at the red-hot core of expansion, inequality, and political relevance. In recent decades, central Atlanta has experienced heavily racialized gentrification while the suburbs have become more diverse, with many affluent suburbs trying to push back against this diversity. Exploring the city’s past and future, Red Hot City tracks these racial and economic shifts and the politics and policies that produced them.

Dan Immergluck documents the trends that are inverting Atlanta’s late-twentieth-century “poor-in-the-core” urban model. New emphasis on capital-driven growth has excluded low-income people and families of color from the city’s center, pushing them to distant suburbs far from mass transit, large public hospitals, and other essential services. Revealing critical lessons for leaders, activists, and residents in cities around the world, Immergluck considers how planners and policymakers can reverse recent trends to create more socially equitable cities.
Dan Immergluck is Professor of Urban Studies at Georgia State University. He has written extensively on housing markets, race, segregation, gentrification, and urban policy.
"The inner city and the suburbs have flipped as low-income residents and people of color are being pushed farther out of Atlanta. Immergluck provides a look into past housing policies that have affected this outcome while also providing a path to a future of more equitable, livable cities."
— Realtor Magazine Online