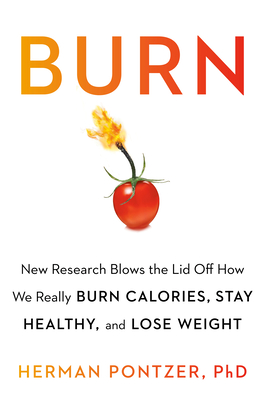 
Available at One of Our Locations
One of the foremost researchers in human metabolism reveals surprising new science behind food and exercise.

We burn 2,000 calories a day. And if we exercise and cut carbs, we'll lose more weight. Right? Wrong. In this paradigm-shifting book, Herman Pontzer reveals for the first time how human metabolism really works so that we can finally manage our weight and improve our health.

Pontzer's groundbreaking studies with hunter-gatherer tribes show how exercise doesn't increase our metabolism. Instead, we burn calories within a very narrow range: nearly 3,000 calories per day, no matter our activity level. This was a brilliant evolutionary strategy to survive in times of famine. Now it seems to doom us to obesity. The good news is we can lose weight, but we need to cut calories. Refuting such weight-loss hype as paleo, keto, anti-gluten, anti-grain, and even vegan, Pontzer discusses how all diets succeed or fail: For shedding pounds, a calorie is a calorie.

At the same time, we must exercise to keep our body systems and signals functioning optimally, even if it won't make us thinner. Hunter-gatherers like the Hadza move about five hours a day and remain remarkably healthy into old age. But elite athletes can push the body too far, burning calories faster than their bodies can take them in. It may be that the most spectacular athletic feats are the result not just of great training, but of an astonishingly efficient digestive system.

Revealing, irreverent, and always entertaining, Pontzer has written a book that will change how you eat, move, and live.
Herman Pontzer is an Associate Professor of Evolutionary Anthropology at Duke University and Associate Research Professor of Global Health at the Duke Global Health Institute. He is an internationally recognized researcher in human energetics and evolution. Over two decades of research in the field and laboratory, Dr. Pontzer has conducted pathbreaking studies across a range of settings, including fieldwork with Hadza hunter-gatherers in northern Tanzania, fieldwork on chimpanzee ecology in the rainforests of Uganda, and metabolic measurements of great apes in zoos and sanctuaries around the globe. Dr. Pontzer's work has been covered in The New York Times, BBC, PBS, Washington Post, The Atlantic, NPR, Scientific American, and others.
"A wide-ranging romp through evolutionary biology, physiology, and anthropology, Burn will make you question what you think you know about metabolism and your waistline."
–Stephan Guyenet, PhD,  author of The Hungry Brain

"Burn is science writing at its best: big ideas, wild and often hilarious stories from the field, and deft explanations. The result will reshape what you thought you knew about how our metabolisms work."
—Alex Hutchinson, New York Times bestselling author of Endure

"Herman Pontzer is one of the most gifted science writers of our time."
–Kelly McGonigal, PhD, author of The Joy of Movement

"Herman Pontzer’s Burn is a fun, fast-paced, eye-opening, and innovative book that will revolutionize how you think about the energy that fuels your body and everything you do. Please read Burn if you are interested in diet, exercise and what makes us human. It’s also enormously entertaining."
–Daniel E. Lieberman, author of Exercised and The Story of the Human Body

"An absorbing, instructive lesson for anyone concerned about their health."
–Kirkus starred review