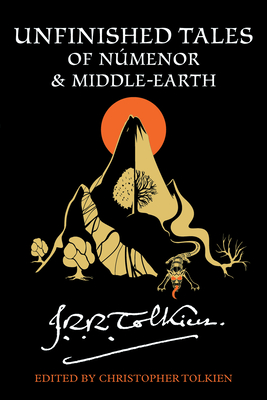 J.R.R. Tolkien's Unfinished Tales of Númenor and Middle-earth is a definitive collection of stories and essays ranging in time from the Elder Days of Middle-earth to the end of the War of the Ring, and further relates events as told in The Silmarillion and The Lord of the Rings. The collection of Tolkien's classic “fairie” tales is edited and with an introduction, commentary, index, and maps by the author's son and literary executor, Christopher Tolkien.

Unfinished Tales of Númenor and Middle-earth concentrates on the lands of Middle-earth and comprises Gandalf’s lively account of how he came to send the Dwarves to the celebrated party at Bag-End, the story of the emergence of the sea god Ulmo before the eyes of Tuor on the coast of Beleriand, and an exact description of the military organization of the Riders of Rohan and the journey of the Black Riders during the hunt for the Ring.

It also contains the only surviving story about the long ages of Númenor before its downfall, and all that is known about the Five Wizards sent to Middle-earth as emissaries of the Valar, about the Seeing Stones known as palantíri, and about the legend of Amroth.

“The tone is heroic, both the heroes and the villains greater than life-size.”—The New York Times Book Review

“An indispensable volume illuminating many unknown stories and details of Middle-earth unavailable elsewhere.”—Douglas A. Anderson, author of The Annotated Hobbit

J.R.R. TOLKIEN (1892–1973) is the creator of Middle-earth and author of such classic and extraordinary works of fiction as The Hobbit, The Lord of the Rings, and The Silmarillion. His books have been translated into more than fifty languages and have sold many millions of copies worldwide.

"The nature and state of this material gives us a rare glimpse of how Tolkien developed his fantasy world over the years." Publishers Weekly

"Another monument to the incredible imagination of Tolkien" -- Sunday Telegraph —