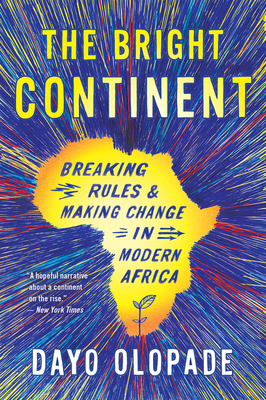 
Ships to Our Store in 1-5 Days
The path to progress in Africa lies in the surprising and innovative solutions Africans are finding for themselves.

“A hopeful narrative about a continent on the rise.” —New York Times Book Review

Dayo Olopade knew from personal experience that Western news reports on conflict, disease, and poverty obscure the true story of modern Africa. So she crossed sub-Saharan Africa to document how ordinary people deal with their daily challenges. She found what cable news ignores: a continent of ambitious reformers and young social entrepreneurs, driven by kanju—creativity born of African difficulty. It’s a trait found in pioneers like Kenneth Nnebue, who turned cheap VHS tapes into the multimillion-dollar film industry Nollywood. Or Ushahidi, a technology collective that crowdsources citizen activism and disaster relief.

A shining counterpoint to the conventional wisdom, The Bright Continent rewrites Africa’s challenges as opportunities to innovate and celebrates a history of doing more with less as a powerful model for the rest of the world.


"For anyone who wants to understand how the African economy really works, The Bright Continent is a good place to start." —Reuters


"[An] upbeat study of development in Africa...The book is written more in wonder at African ingenuity than in anger at foreign incomprehension." —The New Yorker

DAYO OLOPADE has been a correspondent in Washington and in Nairobi, reporting for publications including The Atlantic, The Daily Beast, Foreign Policy, The New Republic, The New York Times and The Washington Post. She holds BA, JD and MBA degrees from Yale University, and currently lives in New York.

“A corrective to Africa’s image as a dark, hopeless place…A hopeful narrative about a continent on the rise.” —The New York Times   "The author gives a multitude of examples and a huge mass of fascinating detail. Her case is persuasive...for anyone who wants to understand how the African economy really works, he Bright Continent is a good place to start." —Reuters   “Bright Continent will change your view of Africa. It's that simple. Dayo Olopade looks with the eyes of a first-generation Nigerian-American and sees a landscape of ingenuity, technological innovation, and grit. A lively and enjoyable read.” —Anne-Marie Slaughter, President and CEO of the New America Foundation and Professor Emerita of Politics and International Affairs at Princeton University “[Olopade] seamlessly traverses the continent, threading a narrative that shows how African innovation is playing a vital role in its own development…This book is filled with numerous examples that ought to make you rethink your perceptions of Africa.” —The Pittsburgh Post-Gazette "Together, these maps form a new mental and strategic landscape, one based on possibilities, not merely perils, and we should be grateful to Olopade for her reimagined cartography." —The Plain Dealer   "Dayo Olopade has written a book that bracingly lives up to its title. In it, an Africa we are all too unaccustomed to seeing comes vividly to life thanks to her restless eye and keen curiosity. It is one of local solutions born of necessity and local heroes who arise from even the most fragile soil." —Howard French, Associate Professor at the Columbia University Graduate School of Journalism and author of A Continent for the Taking   “This book captures the complex thoughts of a whole generation of young Africans. Olapode shows Africa as it is, a complicated space occupied by real people with the desire and the power to shape our futures.” —Uzodinma Iweala, author of Beasts of No Nation and editor of Ventures Africa Magazine “The Bright Continent is a long overdue and much needed corrective to the dominant perception of Africa. It is a book loaded with revelations of heroic, and often ingenious lives, all of which are eloquently and poignantly brought to life through Dayo’s brilliant observations.” —Dinaw Mengestu, author of The Beautiful Things That Heaven Bears and All Our Name "The Bright Continent is an absolute brightness. Sidestepping dead-end debates, the indefatigable Olopade maps out a contemporary Africa which is vital and self-reliant. Her definition of the Yoruba term kanju as 'specific creativity born from African difficulty' will enter the English language. Through strong reporting and clear thinking, Olopade demonstrates how to improve the lives of African youth stuck in a purgatory of 'waithood.' This is essential reading." —J.M. Ledgard, Director, Future Africa, Swiss Federal Institute of Technology and longtime Africa correspondent, The Economist “In her debut book, Nigerian-American journalist Olopade finds qualified cause for optimism about Africa’s future…A refreshingly hopeful argument, well-grounded in data and observation—of considerable interest to students of geopolitics, demographics and economic trends.” —Kirkus "Nigerian-American journalist Olopade’s first book rebuts the view of Africa as mired in poverty, war, and failed aid projects, and instead offers a hopeful perspective." —Publishers Weekly —