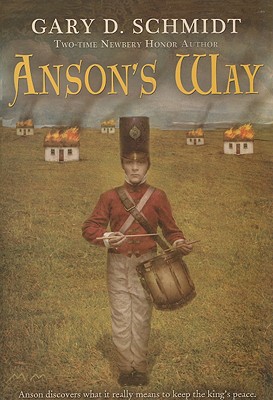 It is the mid-eighteenth century, and young British subject Anson Granville Staplyton has traveled to Ireland, where his regiment has been sent to keep the king's peace. Anson has waited all his life for the day he would follow his father to serve His Majesty in the Staffordshire Fencibles. But the young drummer's notions of glory are shaken when he witnesses the violent injustices thrust upon the Irish people. Anson is torn even further when he meets an Irish hedge master who secretly teaches children the lilting language and history of their won country-lessons that it is Anson's duty to silence. Torn between family honor and his ever-changing sense of justice, Anson struggles to choose his own way in beautiful yet turbulent Ireland.

Gary D. Schmidt is the best-selling author of many books for young readers, including Just Like That; National Book Award finalist Okay for Now; Pay Attention, Carter Jones; Orbiting Jupiter; the Newbery Honor and Printz Honor Book Lizzie Bright and the Buckminster Boy; and the Newbery Honor Book The Wednesday Wars. He is a professor of English at Calvin University in Grand Rapids, Michigan.

"Wonderfully descriptive, captivating prose and well-defined characters...bringing to life a place and time that's breathtaking in its beauty and dramatic in its tragedy." Booklist, ALA, Starred Review

Set in turbulent 18th-century Ireland, this is a coming-of-age story about a boy who seeks to be a drummer in the service of King George II, wearing the uniform of the Fencibles. Coming from a long family line of men who have been Fencibles, Anson believes that they are keepers of the peace; he is ill-prepared to learn the truththat he is involved in the destruction of the culture of Ireland, its laws, customs, and language. In the name of defending His Majesty's realm, he witnesses the murder of an Irish man and his son who refuse to give up their only horse to the ruling landowner, and the brutal whipping of an Irish school teacher; he participates in the burning of a village and watches women carrying old people on their backs to escape Fencible terrorism. He resigns, but not before foiling a final act of terrorism and standing up to his father, a Fencible colonel and a man whose loyalty to the Fencibles has never wavered. Schmidt (The Sin Eater, 1996, etc.) describes the real meaning of ``keeping the King's peace'' in unvarnished terms: it was gory, terrifying, and unjust. A strong novel, as provocative as it is eloquent.
Kirkus Reviews —