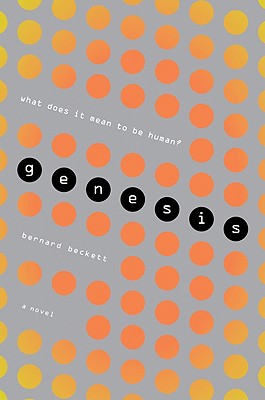 “Genesis is set in a not-so-distant future, where issues of human versus artificial intelligence have turned society upside down. The story takes place in a single room over the course of five hours, and I defy you not to read the entire novel in one sitting. An amazing book.”
— Suzanna Hermans, Oblong Books & Music, Rhinebeck, NY

A stunning novel that's as rich in ideas as it is in suspense, destined to become a modern classic of post-apocalyptic literature

Anax thinks she knows history. Her grueling all-day Examination has just begun, and if she passes, she’ll be admitted into the Academy—the elite governing institution of her utopian society. But Anax is about to discover that for all her learning, the history she’s been taught isn’t the whole story. And the Academy isn’t what she believes it to be. In this brilliant novel of dazzling ingenuity, Anax’s examination leads us into a future where we are confronted with unresolved questions raised by science and philosophy. Centuries old, these questions have gained new urgency in the face of rapidly developing technology. What is consciousness? What makes us human? If artificial intelligence were developed to a high enough capability, what special status could humanity still claim? Outstanding and original, Beckett’s dramatic narrative comes to a shocking conclusion.

BERNARD BECKETT is one of New Zealand’s most outstanding writers and has won many awards in the course of his career. Genesis was written while he was on a Royal Society genetics research fellowship investigating DNA mutations.

More successfully than any other novel I've read recently, Bernard Beckett's Genesis epitomises the investigative ideal of science fiction. By any standards it's a short novel and at 150 pages is perhaps more truly a novella, but in a genre given to overinflated, ponderous tomes screaming out for an editor wielding a samurai sword, there's a refreshing efficiency to Becketts writing. Nothing is superfluous, nothing wasted. Genesis is Beckett's eighth novel and was inspired, we're told, while the author was studying DNA at the Allan Wilson Centre for Molecular Evolution on a Royal Society Fellowship. Previously published in New Zealand in 2006, it won the 2007 Esther Glen Award and the Young Adult Fiction Category at the 2007 New Zealand Post Book Awards, and went on to ignite a bidding war in 22 countries. The novel is due to get a global release this month, published by Houghton Mifflin Harcourt, and in the UK at least will be published as two separate editions: adult and young adult. The themes in Beckett's novel encourage comparison with the work of SF's most successful fictionalising philosopher, Philip K. Dick. Both authors are interested in what it is to be human but their focus is very different. Dick asks what it is to be authentically human and tended to push an ethical agenda; Beckett's concern is the nature of consciousness and that takes him beyond the human to questions of artificial intelligence. And from this perspective ethics are little more than an affectation of human ego. It's interesting and a little disturbing that Adam Forde, the character in Beckett's novel who best epitomises what Dick would classify as authentically human, is not the end-point of Beckett's philosophical investigation but the flawed and misguided genesis of the next stage of evolution. Beckett crafts his story around an interview, or more accurately the academic examination of Anaximander, a young student of history who seeks to join The Academy, the highest authority in her society. Three examiners pose questions intended to draw out the implications of her thesis - and something more - and in defending her thesis she gives us the story of her world and presents the philosophical issues. It's a neat trick for giving us the back-story. The setting is a post-apocalyptic society born from the ashes of The Republic. This was a short-lived social experiment that flowered briefly in the mid 21st Century in the southern islands of Aotearoa following a global conflict that looks to have destroyed the vast majority of humanity. The Republic was established by a wealthy entrepreneur called Plato (of course) who with foresight and incredible wealth bought in to the island economy in the decades before the war until his influence enabled him to move the nation toward a state of technology rich self-sufficiency. With little time to spare he convinced the locals to build a defense system that turned the islands into an impregnable fortress. When genetically manipulated plagues were released in 2052, The Republic was sealed off from the world and the integrity of its borders was maintained from threats without and within with extreme prejudice. Emerging as it did in a period of fear, Plato's Republic was easily imposed on a people simply grateful to be alive. Its motto was "Forward towards the past and it was founded on the principle that change equals decay. The result was a stratified and rigid society in which a person's social class was determined by a genomic reading, and individuality was suppressed in favour of subservience to the state. Where mankind had fallen in the past through embracing change uncritically, The Republic would attempt to control everything, including the ideas in people's heads, in a bid to keep decay at bay. Pure fascism. Anaximander's historical subject is Adam Forde, a long-dead child of The Republic who was key to the collapse of the first Republi —