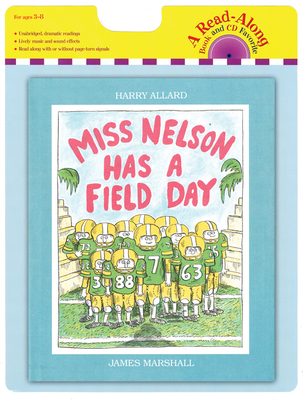 In this companion to Miss Nelson Is Missing—the classic, hilarious story of a misbehaving class—the notorious Miss Swamp returns to Horace B. Smedley School to coach their failing football team. This edition comes complete with the book plus a CD reading of the story.

The Smedley Tornadoes haven't won a game all year, and the entire school is down in the dumps. There's only one person tough enough to turn things around in time for the big Thanksgiving game!

Your class or young reader will have a field day with this funny picture book, which its tongue-in-cheek humor and James Marshall’s simply silly illustrations.

Harry Allard (1928-2017) was the author of many hilarious books for children, including several Miss Nelson and Stupid Family titles, all illustrated by James Marshall.

James Marshall (1942–1992) created dozens of exuberant and captivating books for children, including The Stupids, Miss Nelson Is Missing!, and the ever-popular George and Martha books. Before creating his canon of classic, hilarious children’s books, James Marshall played the viola, studied French, and received a master’s degree from Trinity College. He also doodled. It was the doodles, and the unforgettable characters that emerged from them, that led him to his life’s work as one of the finest creators of children’s books of the twentieth century. In 2007, James Marshall was posthumously awarded the Children's Literature Legacy Award for his lasting contribution to literature for children.

"Children of any age will relish the raucous carrying-on at what has to be the most gloriously awful school in the entire state of Texas." Horn Book

"Children of any age will relish the raucous carrying-on at what has to be the most gloriously awful school in the entire state of Texas." Horn Book Guide —